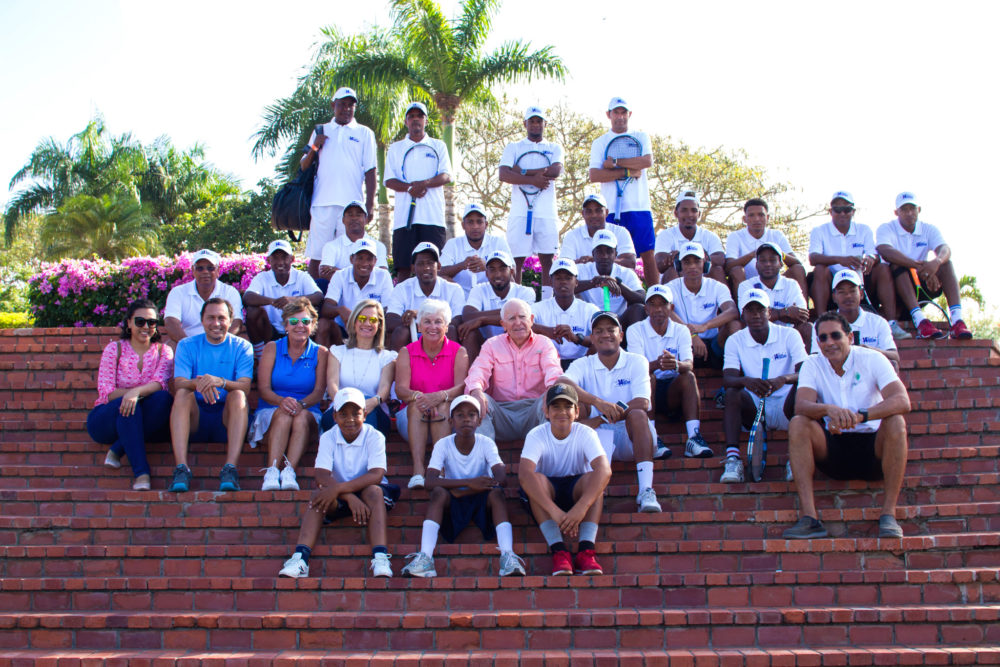 This Thursday, March 7th, the 14th annual McDaniel Tennis Tournament started with the first round of pre-arranged doubles draw tournaments with 22 players from both La Romana Country Club and La Terraza. All donations this year will go, as in years past, exclusively to the Player’s Health Insurance, the Ball Boys Scholarship Fund, and College Scholarships for two students. Following tradition during the McDaniel Family Foundation Tennis Tournament, the community members who support and sponsor the programs met for the Sponsors Appreciation Luncheon this past Wednesday, March 6th as well as got together that same afternoon for an exciting exhibition game!

The country club’s outdoor terrace was outfitted with several tables for guests where, when everybody was seated, Mr. McDaniel spoke on the excellent support of the Casa de Campo community and his sincere gratefulness. In additional to Rick McDaniel and his wife Kathy, also taking part in the celebration was the tournament’s organizing committee; Rick McDaniel, Janet Stingel, Stan Couldrey, Idarmis Cucurullo de Velázquez, Pablo Green, and Adonis Siervodedios, who were all also very grateful for the support of the community in helping to make the 2019 McDaniel Teaching Pro’s Tennis Tournament the most successful yet!

That same afternoon, the sponsors, villa owners, residents, and guests got together to witness what turned out to be an exciting mixed doubles exhibition with the country’s number one female tennis player Joelle Schad and our very own community member Idarmis Cucurullo de Velázquez. The crowd enjoyed an entertaining afternoon of friendly competition after which they were able to talk to and meet the players at the cocktail that was set out prepared by the Casa de Campo food and drinks department.

The first few matches were very exciting, showcasing the pros and ball boys of Casa de Campo. The tournament continues tomorrow Saturday, March 9th, at 9 am with the semifinals at La Romana Country Club, with the finals at 4:00 p.m. on Sunday, March 10th at La Romana Country Club. Other activities include a riverboat cruise at 4:00 p.m. on Saturday, which serves as another big THANK YOU to all those generous Casa de Campo villa owners and businesses who have sponsored the tournament. Since the beginning of the foundation in 2005, donations are used exclusively for the children’s benefit.

The following pictures were taken by Eurys Mercedes on Wednesday, March 6th during the Sponsors Appreciation Luncheon, held at the La Romana Country Club:

And during the first day of the tournament