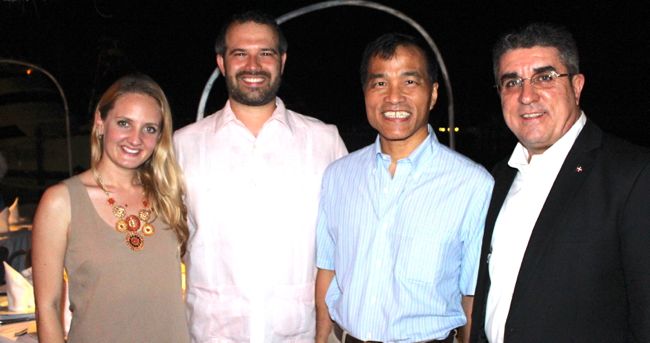 On Friday the 13th of September, shortly following the Café de la Leche gathering / celebration at La Cantina in Altos de Chavón, we (Philip Silvestri and I – Rebecca Hughes) joined the Dr. Kuang-Shih Yeh, Minister of Transportation and Communication of Taiwan, for dinner at La Casita in the Marina Casa de Campo.

Visiting the principal tourist destinations of the Dominican Republic, Dr. Kuang-Shih Yeh, who was joined by Tomás Ping-Fu Hou, the Ambassador of Taiwan in the Dominican Republic arrived to Casa de Campo earlier that same day, accompanied by a variety of Taiwanese visitors; travel agency and airline representatives, a yacht manufacturer, as well as various journalists and cameramen.

During their time in the Casa de Campo resort, the group enjoyed a tour of the property, visiting the Pete Dye designed golf courses, as well as meeting Peter Bonell, Chief Marketing Officer at La Caña by Il Circo in the heart of the Casa de Campo hotel.

The dinner at La Casita was delicious, as always, and turned out to be a wonderfully jovial affair, with endless toasts with a cheer of “chin chin” (rather than “salud” or “cheers”). Also in attendance at the dinner was Daniel Hernandez general manager of the Casa de Campo hotel and Andrés Fernandez, representative of the Casa de Campo – La Romana port and airport.

Visiting the Latino Baseball Hall of Fame with Roberto Weill

As Dr. Kuang-Shih Yeh confirmed “baseball is the national sport of Taiwan”, so perhaps we can expect more visitors from Taiwan in the future?

WOW! The Taiwan Acrobatics Show in Altos de Chavón was absolutely awesome! The show was varied, fun, captivating and action-packed, so much so that it could more accurately be described as a Circus, rather than just Acrobatics!