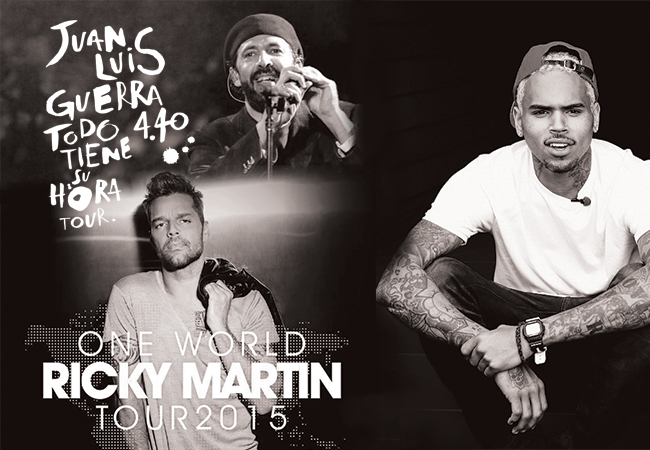 Ricky Martin, Chris Brown and Juan Luis Guerra are coming to the Altos de Chavón Amphitheater! Gamal Haché, co-producer of the Enrique Iglesias concert scheduled for next Saturday, November 7th, has confirmed this by retweetting a publication posted by Diario Libre in his Twitter account.

Casa de Campo has not sent an official press release confirming this information, but given that Casa de Campo Resort & Villa’s co-producer and concert partner is making this information public we are pretty excited about the news! Based on the information shared so far, Ricky Martin would be coming with his One World Tour, set to be on stage for the “first quarter of 2016”, and we take that this means Semana Santa (Easter Break).

Juan Luis Guerra would be be closing his “Todo Tiene Su Hora” Tour right here in Chavón where he presented a spectacular concert to a full house last June.

Chris Brown  has also been announced to bring a one of a kind concert which we assume is part of his tour to promote his latest studio album “Royalty”.

Let’s not forget that we have not received an an official press release from Casa de Campo but we take it that the information being shared in major national publications looks to be true. We will keep you posted with details as we get them. What we can tell you is that it seems that the Altos de Chavón Amphitheatre will be the stage for one of a kind concerts and shows in 2016!