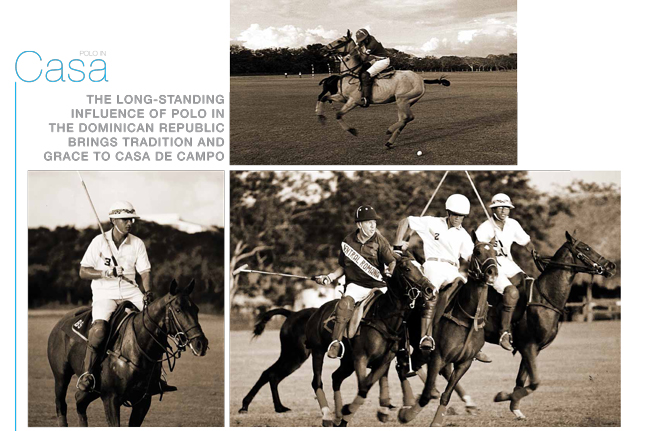 Did you know that the Casa de Campo Polo Club is this year celebrating 40 years of existence? Which is why in this edition of CasaLife we celebrate the rich history of polo not only in the Casa de Campo resort, but also in the Dominican Republic.

The Casa de Campo Polo Club was first started in the early 1970’s – before Casa de Campo itself was even open, and today with a loyal membership of Casa de Campo villa owners and residents from across the Dominican Republic and the world – the club continues to thrive. In this issue of CasaLife we celebrate the legacy of Dominican polo, with “A history of polo”, as well as coverage of the visit of world-famous polo player Nacho Figueras.

Also gracing the pages of this holiday edition of CasaLife is coverage of “Dueños 2013”, a celebration for the Casa de Campo villa owners, the 36th anniversary of MARAT Legal commemorated alongside SILGON at La Cantina in Altos de Chavón, a philanthropic occasion with Arturo Fuente and Hublot in Santo Domingo, as well as the beautiful wedding of Luisa Cabrera and Kevin Faist.

“Fresh Faces in Casa”, a new addition to CasaLife, inaugurated in our previous issue with young jewellery designer Allegra Fanjul, continues in this issue with Leo Proaño and Michelle Villalobos. Leo Proaño is an up and coming movie producer, whose movie “Cristo Rey” opened in Dominican cinemas this week (December 25th), while Michelle Villalobos is the founder of the Women’s Success Summit (www.WomensSuccessSumit.com), the largest bi-yearly conference for entrepreneurial women hosted in Miami.

In anticipation of the Fundación MIR Magical Splendor event, CasaLife was thrilled to get together with Ángel Sánchez for an interview on his support of the charity, his new collection and future plans. As the presenting designer at the MIR event on Saturday the 18th of January, you will soon get the opportunity to not only meet Ángel Sánchez, but also admire and purchase his designs, as well as give to a great charity. Click here for event details.

Back in Casa de Campo, we visit the stunning Casa de Campo villa of Phyllis Berney, whose home in Barranca Este was designed by artist Leopoldo Maler and Carlos ‘Dudy’ Lebinsky more than 20 years ago. A keen art collector for her entire life, “Casa B” is a domestic masterpiece of art and architecture.