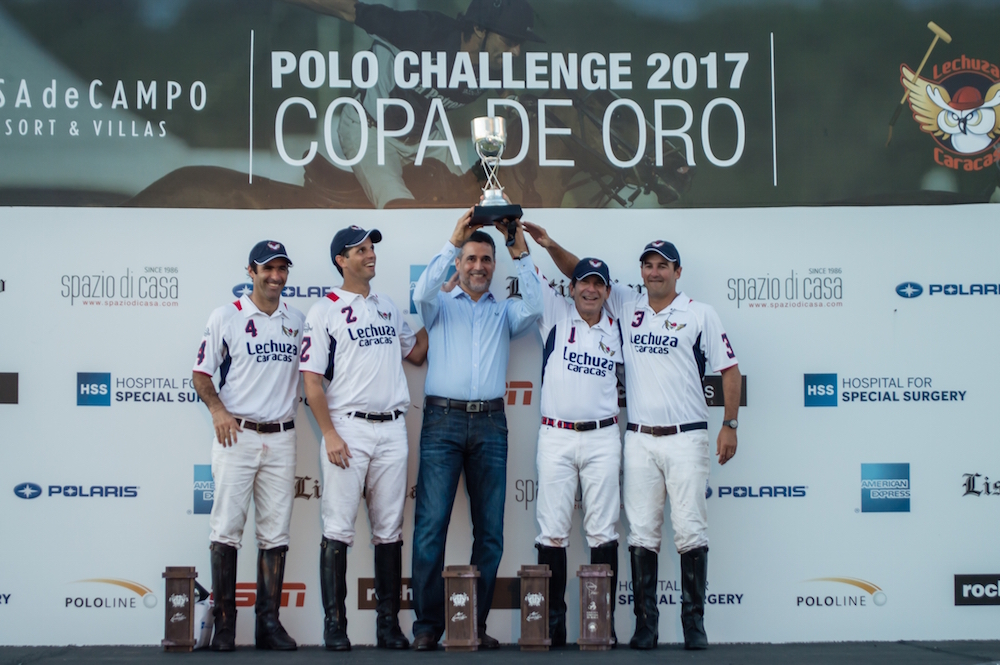 This past Saturday, the Gold Cup Final on the 22-goal category took place at Casa de Campo. The finalists were two of the most regular and dominant teams of the qualifiers: Lechuza and Cinque Terre. For the After-Polo party, the audience was treated to Chantal del Pino who performed with a band. As always we were taken with her beautiful voice.Last year, we also had the pleasure of hearing her perform at the Gold Cup finals 2016.

It was a very popular day at Casa de Campo; the spectators showed up with enthusiasm, and several car clubs from the region attending to show their best vehicles. The final match was a fair and open game right from the start. Victor Vargas took care of inaugurating the scoreboard with a goal, and Lechuza took the lead quickly. Pelon Stirling, one of the best polo players in the world, scored for the Venezuelan team as well, but then Toto Collardín stepped up and the chukka closed with just one goal of difference between both teams. The two following periods were very important. Lechuza stayed firm and strong at the same time. Nero, Stirling, and Alfredo Vargas scored first, and before reaching half time, Stirling and Victor Vargas exchanged goals with Toccalino and Collardin; the first half of the game closed with 7-3.

Cinque Terre, however, was determined not to give up and they proved it in the chukkas that followed. Santiago Toccalino had one of his best performances of the season in this game and started reducing the difference between his team and the Venezuelans. It was such a great game for Toccalino, that he was the top scorer in the finals. Unfortunately for the Italian team, Lechuza was resilient and the La Dolfina duo, Nero-Stirling, showed again the extraordinary connection they have and kept on scoring for their team. Before the game ended, a couple of goals by Toccalino and a great run by Victor Vargas set the definitive final score and Lechuza, the only undefeated team so far, won the Cup by 12-8.

Polo Challenge RD 2017 continued on Sunday with the Subsidiary finals, Casa de Campo – Jesús Arredondo, Rafa García, Francisco Bensadon, Juan Villamil – vs. Costasur – Julio López, Josh Cork, Ramiro Garros, Alex Schad – and the finals, Pitirri-El Palenque vs. La Potranca, of the 12-goal Gold Cup. Costasur and Casa de Campo played on Casa de Campo’s field #1 for the Subsidiary Finals. The locals kicked off the match in a very solid form and they quickly took the lead thanks to Francisco Bensadón and Jesús Arredondo. It was a disputed but open match; Costasur was the great protagonist of the second chukka, closing the period by 3-1. During the third period, Casa de Campo widened the difference to a point where it was impossible to catch up for their rivals. Juan Villamil and Jesus Arredondo took their team to lead by 6-3 at halftime. On the second half of the match, goals were exchanged between both teams but Costasur was not able to recover, and Casa de Campo won by 8-5.

Later on, on Field 3, the Finals of the Gold Cup were to be defined by Pitirri El Palenque – Enrique Bonetti, Tolito Fernández Ocampo, Bete Donovan, Rafa Pérez Diez – and La Potranca –Rafa García, Esteban Panelo, Milo Fernández Araujo, Rulo Arata – who had already won the Silver and Bronze cups, respectively. In front of a big audience and with Martín Aguerre and Gastón Dorignac as referees, the first two chukkas were very even, rowdy but the game was flowing. During the third chukka, La Potranca showed off their great skills, reaching half time leading by 6-4. The second half of the game kept La Potranca’s performance up, but little by little, everything began to change. Pitirri-El Palenque showed great teamwork, confirming this team’s reputation as one of the best in its category. Tolito Fernandez Ocampo was relentless from the penalties to the plays. During the sixth chukka, the team stepped up and scored four goals in a row, to secure a new title on the Polo Challenge 2017, as they had done some weeks ago, at the Silver Cup. Final score was 12-10.

The Caribbean Open starts THIS THURSDAY and it will see teams of up to 26 goals fighting for the title!

The following gallery of photos were taken by Mairobi Herrera on Saturday, March 25th at the Polo Challenge RD 2017 Gold Cup Finals in Casa de Campo: