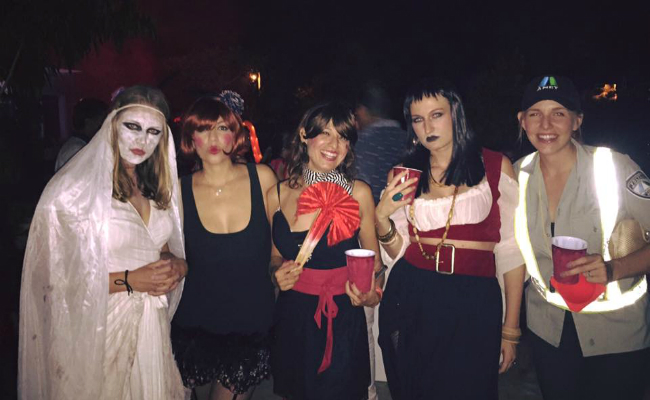 Trick or Treat! Halloween weekend is over and we have to admit it was quite a spooky and busy one! Many of us (myself included) spent Saturday evening running between the Dueños dinner and several costume parties. By far, the Cacique 31 Haunted Mansion party was the most attended and elaborate one… and spooky!

Let’s start off by mentioning that Cacique 31 was absolutely transformed into a scary mansion with skeletons hanging, smoke blasting from every corner, spider webs tangled up everywhere and even the spiked punch had bloody fingers swimming in it. Edward del Valle and Mathew Parento, hosts for the evening, really pulled off a cool setup worthy of the spookiest mansion.

How about the costumes? I’ll give props to those Dueños who ran home after the dinner party to change into their glam and scary costumes. I for one did not prepare ahead of time as much as other people did and in turn was forced to be “half-dead” as I really didn’t even have time to paint my full face between parties! Regardless, I think I was “half-scary” and did a semi-decent job with what I could find at home between parties: an eyeliner and white eyeshadow.

Other people on the other hand, spent weeks planning their costumes and the effort was so worth it.

Martina and Gabriel Pinto had some legitimate AMET (traffic police) costumes made for the occasion! Jorien and Arturo Quezada transformed into scary pirates in under an hour. Hosts Edward del Valle and Mathew Parento were into the Hunger Games theme, and there were too many sugar skulls to even count!

In addition to the awesome costumes, witches, skulls, ghosts and goblins danced the night away at Cacique 31, making for one entertaining Halloween evening in Casa de Campo.