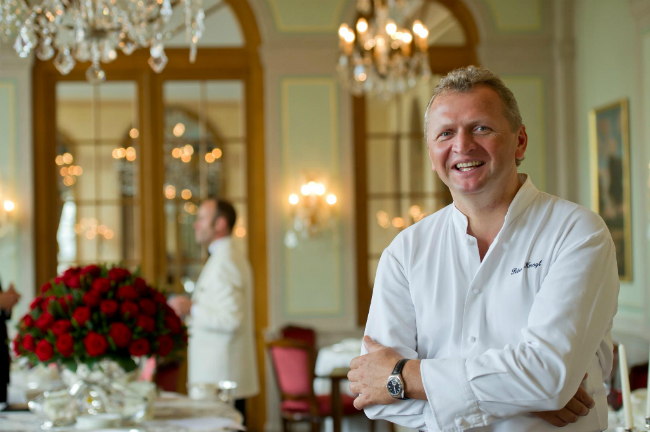 Davidoff’s Tour Gastronomique Art & Gourmet Weekend is something to look forward to, especially since Swiss gastronomy is coming here to Casa de Campo in the form of Peter Knogl!

Peter Knogl is one of the most talented chefs. Born in Bavaria on the border of Austria, Knogl had a culinary apprenticeship for three years in Bavaria and then immediately went to work in some of the finest restaurants and properties in Germany, Spain, France, London, and Switzerland.  Just in a matter of a few months in Cheval Blanc at the Grand Hotel Les Trois Rois in 2008, Peter earned 2 prestigious Michelin stars and 18 Gault Millau points. With his new interpretation of classic French cuisine, he also was named the best newcomer in 2009 and Chef of the Year 2011 by the acclaimed Gault Millau restaurant guide. In 2015, he was again praised with 2 Michelin stars and 19 Gault Millau points. It was the first time that a hotel chef has achieved this top honor. With 19 Gault Millau points out of 20, Cheval Blanc joined the elite circle of Swiss restaurants.

This year, Peter got his third Michelin star for Cheval Blanc, making it the first three star restaurant in Basel region. The Michelin guide Switzerland said the cooking of the Cheval Blanc’s German chef Peter Knogl was “marked by a classical basis with sophisticated ideas full of aromas, power and expression which turn the meal into a unique experience.”

They are two main guides. It has been a long discussion about which one is more influential: Michelin is more popular and therefore more influential, while Gault Millau has been considered more purist due to the main system being based purely on the quality of the food.

What started as a marketing tool for the Michelin Tire Company in France in 1900 by brothers André and Édouard Michelin, the guide originally listed places to stop for gas while traveling.  By 1926, the red-jacketed Michelin Guide had evolved into a restaurant guide for several countries in Europe, awarding stars for a fine dining experience. Now it is an international scale for restaurants; think of it as the Oscars for movies.

Worldwide only around 100 restaurants have three Michelin stars. Japan has the most, followed by France and the United States.

Gault Millau rates on a scale of 1 to 20, with 20 being the highest. Restaurants below 10 points are almost never listed. The points are awarded based on the quality of the food, with comments about service, price or the atmosphere of the restaurant given separately. Based on this rating, high-ranking restaurants may display one to five toques.

The internet is full of people raving about Peter’s state of the art dishes.  Cheval Blanc has become a must place to visit because of him, keeping Switzerland on the gastronomy map.

Stay tuned for our interview with the chef for CasaLife!