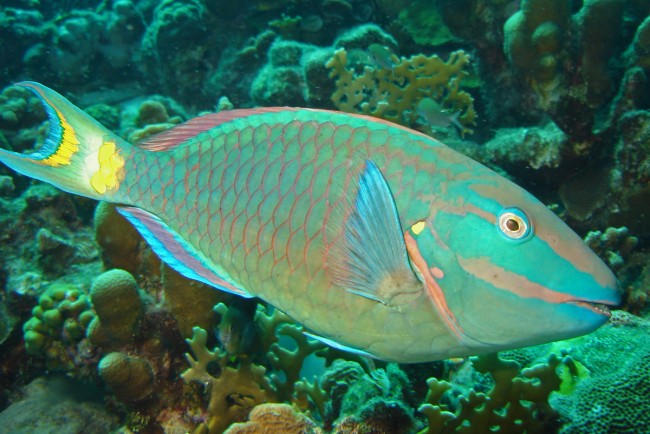 Meet the parrotfish. This big colorful fish could be the saving grace or a death sentence for the Caribbean’s coral reefs. Find out what you can do to help.

According to a joint report created by the United Nations Environmental Project, the Global Coral Reef Monitoring Network, the International Coral Reef Initiative, and the International Union for the Conservation of Nature, most Caribbean coral reefs (which, by the way, are a source of over 3 billion [yes that’s billion, with a B] dollars every year in revenue for Caribbean nations) will have disappeared in the extremely short span of 20 years.

Why? Because overfishing of the various fish species in the Caribbean has led, and will continue leading to the growth of seaweed populations, which in turn cuts down and reduces coral reefs.

One of the fish that suffers most from this is the parrotfish, referred to locally as the pez loro. They are being fished on a massive scale all across the Caribbean, commonly used here in the Dominican Republic for fried fish. Nations such as Barbuda have taken motions against this decline, banning the fishing of parrotfish and sea urchins, which also graze on the region’s seaweed populations.

So how can we help? Here in La Romana we can work on a governmental scale by emailing the provincial senator, Amarilis Santana Cedano about this crucial issue. A list for the contact emails of every Dominican senator can be found here. On a more local level, a good deal of citizens have taken it upon themselves to not order fried fish (or at least order a different type of fish), boycotting establishments that serve parrotfish, as well as fisheries that take them and other ocean grazers.

An alternative to ordering parrotfish is the lion-fish, which can be prepared as part of fried fish, ceviche, as well as other delicious seafood dishes. In contrast to parrotfish, the lion-fish is far too abundant in the Caribbean’s oceans, so fishing of it is actually supported by the Dominican government!