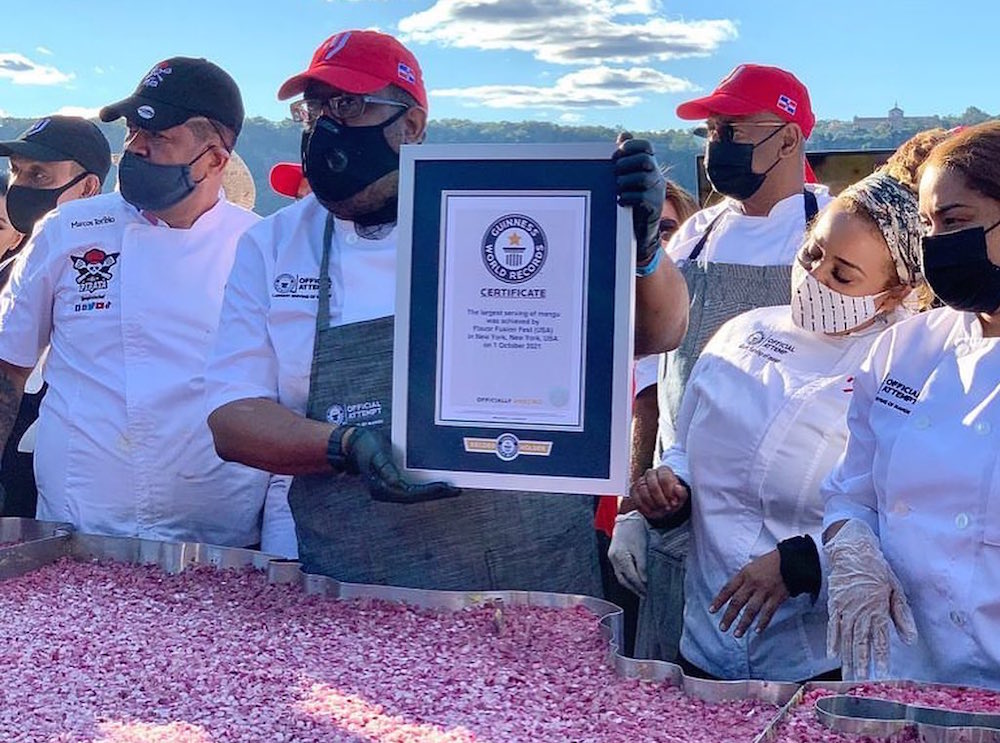 The Dominican Republic was crowned on Friday, October 1 with the Guinness Record of the largest serving of mangú preparing over 1000 pounds with over 4500 plantains, beating the previous record of 640 pounds back in 2017. The project was organized by “Flavor Fusion Fest” and the main chefs were Amilkar Gonell in association with his counterpart María Marte, holder of two Michelin stars, and the talented Pamela Gonell. The event was held at The Hudson restaurant, located in Upper Manhattan.

More than 100 volunteers participated in different tasks, from peeling 4,500 plantains exported from Tamayo, Bahoruco province, in the Dominican Republic, and cutting 260 pounds of onions to prepare the mangú with authentic Dominican flavor. Chefs Wandy Robles, Carolina Arias, Martín Omar, Rosanna Ovalle, Ana Lebrón, Marco Toribio, Lenin, and Ninja, among others, were a crucial part of the support team, ensuring that the preparation of the plantains was carried out under the established parameters and in fluid form.

The mangú was presented in a gigantic mold made of stainless steel with the silhouette of the Dominican Republic, designed by the architect José Báez Liberata. Of the 1,200 pounds of mangú, only 1,000 were certified by Guinness record watchers. The mangú was served with “Los tres golpes”: cheese, salami, and fried eggs.

To achieve the record for the largest mangú served implied having produced a dish that responded to the requirements established by the association: of the 1,000 pounds of mangú, 80% had to be mashed plantains and 20% a complimentary product which in this case was onions; maintain food hygiene and sanity when handling and preserving products, no waste, and donate at least 50% of prepared food. Guinness World Records representative Michael Furnari was in charge of presenting Amilkar Gonell and his team with the official certificate from the association as new leaders in having managed to break the record.

“Today, the Flavor Fusion Fest is trying to beat the Guinness World Record title for the world’s largest serving of mangu. The record to beat is 640 pounds. Today, Flavor Fusion Fest cooked a thousand pounds of mangú a new Guinness World Record Title… Congratulations, you are officially amazing!”, expressed the certifier of the Guinness record, after presenting the trophy to the chefs.

Congratulations Dominican Republic and everybody who participated in this project!