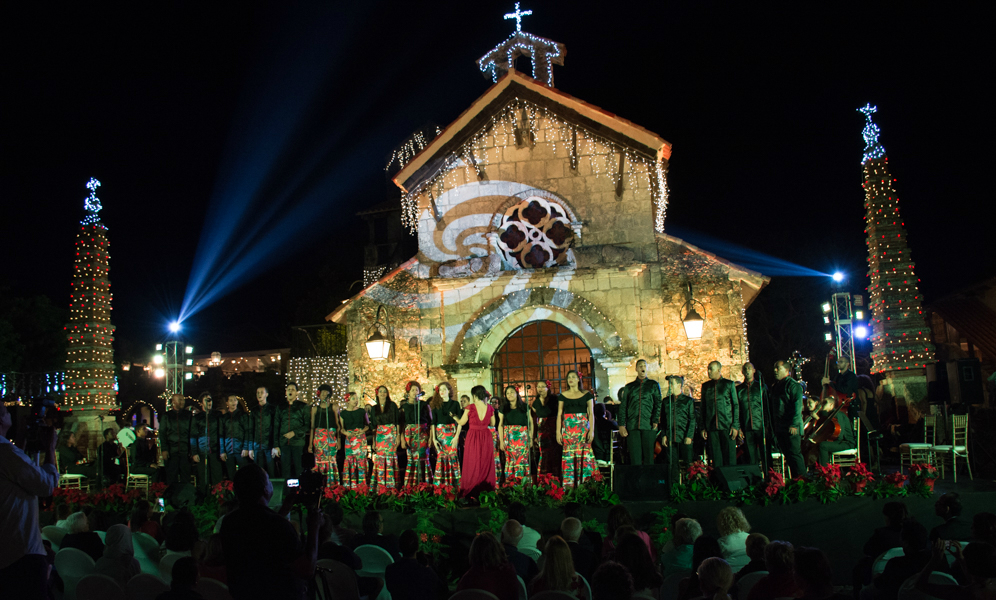 The magical evening started with the arrival of Santa Claus who greeted Casa de Campo little ones with a hearty ‘HO HO HO’ in his very own Santa house! This year, the amphitheater team, in charge of all the decorations, really outdid themselves. Candy canes and waterfall Christmas lights lined the staircase that led to Santa’s house, and a beautiful front porch was constructed for kids to take funny pictures with the elves or even Santa himself. Inside, the jolly Santa Claus and his elves received Christmas wish-lists and good-hearted children who sat for photos atop Santa’s lap in his well-decorated workshop. We saw many happy faces from children, and even adults, who played and ran around the snowy setting.

As night fell, the Chavón Plaza buzzed with holiday cheer with more than 400 members from the Casa de Campo and La Romana communities. Acting as the Mistress of Ceremonies was one of Casa de Campo’s own, Renata Soñé, otherwise known as Miss Dominican Republic 2005 and runner-up of Miss Universe. After welcoming the many guests, Renata turned the stage over to Father Victor García who blessed the event, and was followed by Mr. Andrés Pichardo and Mr. Carlos Santos Durán, who both gave a few words of appreciation and excitement for the holiday season.

Renata invited all the kids to the stage to join them for the countdown…10,9,8,7….2,1, and suddenly Altos de Chavón became alit with lights, from pathways to rooftops, including covering the 25 foot tall Christmas tree! Christmas 2016 in Casa de Campo had formally begun!

The National Youth Symphonic Orchestra, directed by Maestro Alberto Rincon, and the Koribe Choir, directed by Prof. Nadia Nicola were magnificent in their performance. Popular songs included: “Noche de Paz”, “Linda Quisqueya”, and “El Tamborilero” by the orchestra, and “Con mi burrito sabanero” and “Volvio Juanita” sung acapella by the Koribe Choir. The musical treat was a lovely end to the lighting ceremony, and thanks in part to the support of the Ministry of Culture of the Dominican Republic.

The holiday schedule in Altos de Chavón continues TODAY with a Maracas Workshop for the kids at the Regional Museum of Archeology, followed by popular Dominican Christmas carols – so don’t forget to bring your güira and tambora!  Tomorrow, remember that The Gallery will host the opening cocktail for the art exhibition, “Extrasensorial” by Carlos Montesino; and the party continues on Friday with Fiesta on the Rocks with Benny and the Cupids!

Santa will visit again so have your kids write their Christmas letters and deliver it to Santa’s house! View the video below of this year’s Lighting Ceremony, posted on Altos de Chavón’s Facebook page, and click the link at the bottom of the page to for the complete holiday calendar of events.

The following photos were taken by Mariana Heredia during the Christmas Lighting Ceremony on Friday, December 9th in Altos de Chavón:

The festive season is closer than ever! The complete Christmas Holiday Calendar is here!

This Christmas, Altos de Chavón is the place to celebrate! With the official inauguration of the merry season with the Christmas Lighting Ceremony on Friday, December 9th, we thought it would be helpful to bring you the FULL schedule of holiday events coming your way. We hope to see you all here, and encourage you to have a look at the video below to put a smile on your face and spread the holly, jolly cheer. Read more.