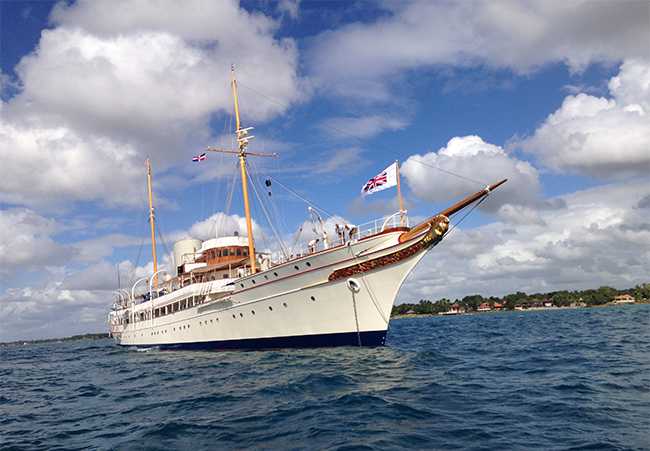 Isn’t she beautiful and graceful? “Nahlin” visited us at the beginning of the year and was docked outside the Marina Casa de Campo because this luxurious lady was too big to come in.

On Friday January 16th the 300ft (91.44m) custom motor yacht  “Nahlin” was here, and even though she was too big to come in, she docked just outside of the Marina Casa de Campo.

Nahlin is a luxury yacht and one of the last of three large steam yachts constructed in the UK. She was built for Lady Annie Henrietta Yule, heiress of Sir David Yule, and was launched in 1930. She is currently owned by British industrial entrepreneur Sir James Dyson, who purchased her from Sir Anthony Bamford, Chairman of JCB. The name Nahlin is taken from the Native American word meaning “fleet of foot” and the yacht has a figurehead depicting a Native American wearing a feathered headdress beneath the bowsprit.

The yacht was bought in 1937 by King Carol II of Romania for £120,000 and renamed Luceafarul (Evening Star), and later Libertatea. When the Romanian monarch abdicated in 1940, she became the property of the Romanian Ministry of Culture and was tied up in the port of Galați on the Danube as a museum and later as a floating restaurant.

“Nahlin” (formerly Libertatea) is a 91.44m (300m) motor yacht built by John Brown & Sons in United Kingdom at their Clydebank shipyard. Last refitted in 201o by Blohm + Voss Shipyards, this luxury vessel’s sophisticated exterior design and engineering are the work of G.L. Watson & Co.. Her interior was designed by Sir Charles Allom.

In 1989 the yacht was rediscovered by luxury yacht broker Nicholas Edmiston who purchased the vessel in 1998 from the Romanian government. The company paid $265.000 for her, scrap metal value. Back in the UK, she underwent a 15-year process of stabilization and a £25 million restoration led by G. L. Watson & Company, and was recommissioned in 2010 as the Nahlin. The refit was undertaken by Nobiskrug at Rendsburg, Germany, and completion was at the Blohm + Voss shipyard, Hamburg, where diesel engines replaced her old steam turbines.

If you missed her, here’s a video of the magnificent yacht:

A few other megayachts we’ve spotted in the Marina Casa de Campo are:

Arriving during Semana Santa (Easter week), the mega yacht “MY GIRL”, owned by a wealthy businessman from the United States, is certainly an impressive addition to the Marina Casa de Campo.

On Saturday and Sunday the 31st of March and the 1st of April, Casa de Campo villa owners and visitors were treated to the magnificent sight of a very impressive megayacht, “Le Grande Bleu” docked directly opposite Casa de Campo’s Minitas Beach and just off the coast of the exclusive Punta Minitas neighborhood. It’s all glamor and fame here in Casa de Campo!

The “Vibrant Curiosity” – at 280ft is the 3rd longest yacht to ever visit the Marina Casa de Campo.

The magnificent “Mirabella V” is a sloop-rigged super yacht, which was completed and launched in 2003 for Joseph Vittoria, former chairman and CEO of AVIS rental car company, at a cost of more than US$50 million dollars.

The ‘A’ is owned by 38 year old Russian billionaire Andrei Melnichenko, was designed by Phillipe Starke, is 394feet and cost 200 million dollars to build!