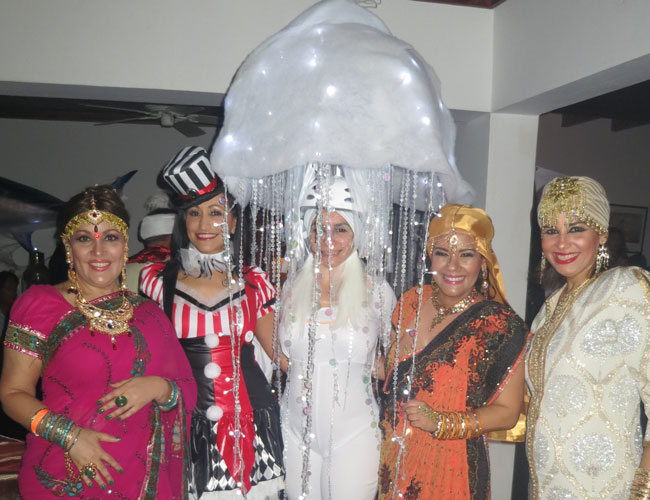 When living in the Dominican Republic, there comes a point when some things are most accurately described in Spanish – or even Dominican, and in this case the expression “¡mortal!” is very definitely the most suitable way to describe the Casa de Campo Halloween Party celebrated on Sunday the 3rd of November.

[ “¡Mortal!” is used to describe something really really awesome.]

Within the dungeon, lit in eery red, bats flew from the rafters, tarantulas crawled across the furniture and a coffin stood hauntingly in a the corner. The scene was set for the perfect night(mare)… and as the horror unfolded more and more monsters rose from the dead and came out to shake their bones.

The midnight howling of the party echoed out so loud and clear across the resort, that even actor Frank Perozo, whose staying in Casa de Campo for the filming of new movie “La Extraña”, joined the dance of the dead.

“The party was amazing! For the food this year, we brought a ‘carrito de sandwiches de pierna’ (a cart with pork sandwiches) from town (La Romana), they were to die for!

And thank you to all who supported us this year, we hope you had as much fun as we did!”

— Patricia Proaño, one of the party organisers

With so many Casa de Campo villa owners and residents with the most macabre costumes – everyone was vying to be named winners in the costume contest… especially in the “scariest” category which had a return flight to Puerto Rico with Seaborne as the prize!

Most original: Patricia Proaño, dressed as a medusa jellyfish
[Prize – a boattrip for 8 to Palmilla, courtesy of Toybox.]

Best couple: The Ghosts
[Prize – dinner for 2 at Travesias restaurant in Santo Domingo.]

Best male: Simon Rosatti dressed as a girl going to the gym
[Prize – a massage courtesy of the Casa de Campo Spa.]

Funniest: Jesmin Botello, dressed as a girl in the spa
[Prize – a massage courtesy of the Casa de Campo Spa.]