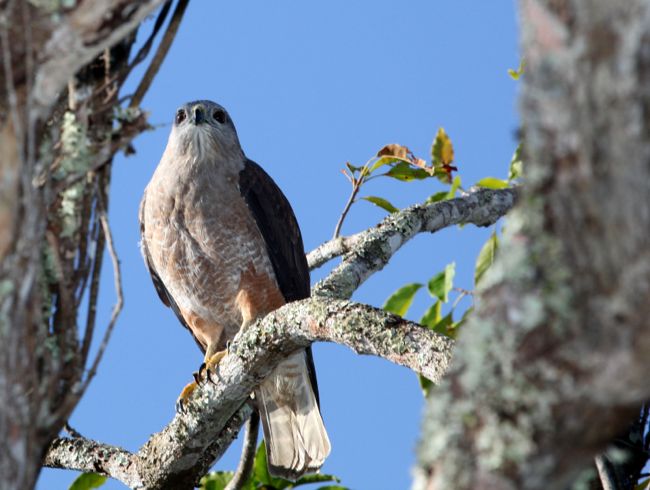 The Ridgeway Hawk, better known in the Dominican Republic as the “Gavilán de la Hispaniola”, used to be a very common sight across the island of Hispaniola. Unfortunately, since the 1980’s numbers have declined dramatically and it is now the most endangered bird on the island – with only approximately 300 known to exist in the wild.

This bird, referred to by scientists as the Buteo ridgwayi, is often confused by the general population with the Red-tailed Hawk (Buteo jamaicensis) known in the Dominican Republic as Guaraguao, which is significantly larger and hunts animals – such as chickens. It is for this reason that the Gavilán de la Hispaniola has become so endangered. To protect their chickens people have been hunting the Gavilán de la Hispaniola birds, thinking they are Red-tailed Hawks.

The Guaraguao (pictured left) is a very common bird in the Dominican Republic and there are even some living in Casa de Campo.

The Gavilán de la Hispaniola is a very trusting species, unlike the Guaraguaos, it is not afraid to get close to humans and during the breeding season they can get as close as just 3m, says Jorge Brocca Argentine ornithologist of the Ornithological Society of Hispaniola, who has worked on projects to increase the numbers of Gavilán de la Hispaniola within the Dominican Republic. This is yet another reason why numbers have dwindled – their friendly nature has made them more susceptible to being killed.

Since 2009 the Central Romana Corporation based in La Romana, the Punta Cana Foundation and The Peregrine Fund, have ran reintroduction projects for the Gavilán de la Hispaniola in various parts of the country, and especially in some areas of land owned by the Central Romana Corporation, such as the town of Pedro Sánchez in the province of the Seibo.

Fortunately, these projects have been successful. With many of the birds that were re-introduced having yielded offspring in the wild, meaning that the numbers of the Gavilán de la Hispaniola are finally (slowly) on the rise.

About the Gavilan de la Hispaniola

The Gavilan de la Hispaniola species is distinguished by its greyish brown in the upper body, while it’s chest and abdomen is grey with brown. The thighs are a brick-color and the legs are yellow with strong heels and sharp nails. The tail is black with thin white bars. Females are slightly larger than males.

They feed mainly on lizards and snakes, but supplement their diet with rats, mice, frogs and occasionally wild birds.

Their size ranges between 36 and 41 cms, in comparison to the Guaraguaos that can grow up to 65 cms.