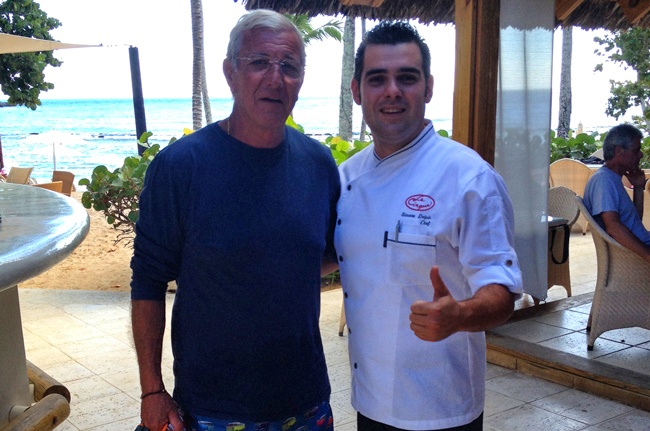 Is there no end to the number of famous faces we spot around Casa de Campo? No, no there isn’t. And our most recent celebrity sighting comes in the form of another sports personality – Marcello Lippi!

Marcello Lippi is a hero to Italians all over the world. Why? Because in his role as manager for the Italian football team he led Italy to Victory in the 2006 World Cup in Berlin! Auguri!

Marcello Lippi came to Casa de Campo as the guest of Mauro Caslini, President and CEO of IB Nautica and was spotted at Minitas Beach earlier this week, and while he blended into the crowd more easily than some of our other recent visitors, Shaquille O’Neal for example, he was of course recognised by Simone Delpin, chef at the Beach Club by Le Cirque and Massimo Caretta, manager of the Beach Club by Le Cirque and La Caña by Il Circo.

Very excited to meet this Italian football legend, Simone Delpin told Casa de Campo Living, “we are both from Tuscany”, and also revealed that Marcello Lippi enjoyed lunch at the Beach Club by Le Cirque, choosing the Cesar Salad, “he loved the salad and he loved the restaurant”, said Simone, who added “after that we talked about football.”

Marcello Lippi, Commendatore OMRI (Italian pronunciation: [marˈt͡ʃɛllo ˈlippi]; born 12 April 1948) is an Italian World Cup-winning football former manager and player. He is currently the director of football of Chineseside Guangzhou Evergrande, the club that he managed from 2012 until 2014. He also served as Italian national team head coach from 16 July 2004 to 12 July 2006 and led Italy to win the 2006 FIFA World Cup. He was re-appointed as Italian national team head coach in the summer of 2008 and was succeeded by Cesare Prandelli after the disappointing performance in the 2010 FIFA World Cup.[1]

He was named the world’s best football manager by the International Federation of Football History and Statistics (IFFHS) both in 1996 and 1998, and world’s best National coach in 2006.[2] He is the only coach to have won the most prestigious international competitions both for clubs in different continents, and for national teams (the UEFA Champions League and the Intercontinental Cup in 1996 with Juventus; the AFC Champions League in 2013 with Guangzhou; and the FIFA World Cup in 2006 with Italy).