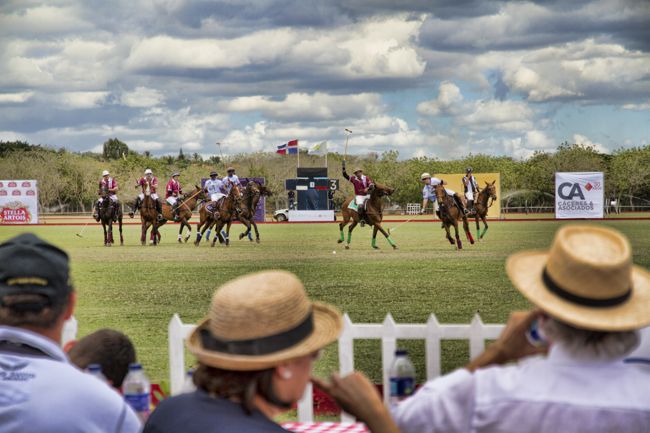 The 11th annual Casa de Campo Copa Semana Santa polo tournament was played out with great success from Tuesday March 24th, culminating with the grand finals last Saturday April 4th. And while much has been said about the glamour, elegance and fun of the celebration surrounding the finals (because let’s be honest it was indeed outstanding), the undisputed stars of the show were the polo players, and so here we bring you a run-down on the action from the eyes of Julio López, Casa de Campo’s own up and coming polo star.

In the first game of the day, AZIMUT faced off with the young and newly formed Zatara Team, lead by their captain Omar Leonel Fernandez. The match began with some very fast polo by Zatara pro Heriberto Constanza, with Pedro Haché and Omar Leonel Fernandez both finishing off some nice plays with fine goals.

AZIMUT tried to battle back with some quality defensive play from Ramon Espinal and the goal scoring abilities of Calixto García-Vélez who scored 6 goals, but it wasn’t quite enough as Zatara closed out the match with a great breakaway play by Omar Leonel Fernandez to seal the victory and the first title for Zatara. Also competing for AZIMUT was Casa de Campo villa owner Herbert Schoderbock who played a great game and Ramon Espinal who scored one goal.

Herbert Schoderbock for AZIMUT with Omar Leonel Fernandez for Zatara

Omar Leonel Fernandez was awarded the Most Valuable Player (MVP) while the Best Playing Pony (BPP) was CR #350 “Cotizada”.

Congratulations to Zatara, victorious over AZIMUT 9-8

The game opened as the teams paraded onto the field flanking an INFINITI QX60, following which guest of honor Veronica Bocelli threw out the inaugural ball accompanied by Rafael Torres- President Casa de Campo, Dr. José López- the Health Vice President of Central Romana & Director of the Centro Médico and Philip Silvestri- Founder & CEO of SILGO and President of CasaLife Magazine.

In the high goal final, the pinnacle of the event, La Carbuccia set up to try and beat tournament favorites Lechuza CTE.The match began in a tense, tactical manner as both teams tried their best to contain each other and prevent many clear goalscoring chances.

Eventually Lechuza CTE found the breakthrough and took a 3-0 lead. La Carbuccias pro Zenon Zorilla slowly got his team back into the game as the 2nd chukker ended 3-2 in favor of Lechuza CTE.

Eventually Alfredo Vargas, with the support of Ignacio Deltour and Matias Logioco, took control of the game and established a 4 goal lead. La Carbuccia continued to battle as match MVP and back Anton Tejeda kept pushing their team forward, but it wasn’t enough.

La Lechuza won the match comfortably and proclaimed themselves champions of the Casa de Campo Copa Semana Santa with a final score of 10-6.

The following collection of images were taken by Roger Ramirez during the finals of the Casa de Campo Copa Semana Santa polo tournament:

The following collection of images were taken by William Petrongari during the finals of the Casa de Campo Copa Semana Santa polo tournament: