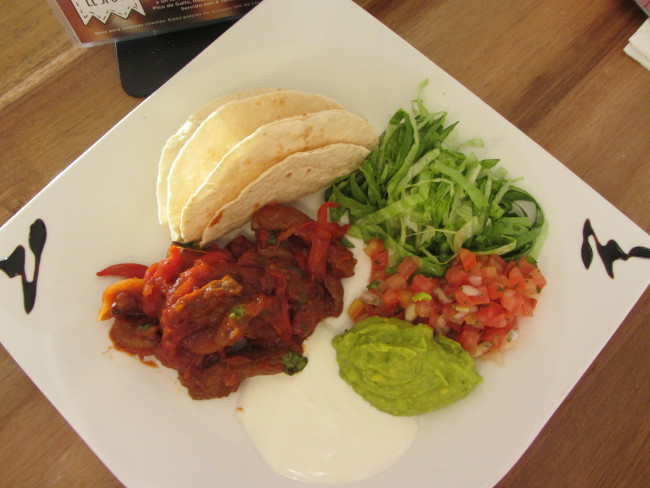 Cinco Gelato is everyone’s favorite gelato shop – especially to those with a sweet tooth! Their gelatos are to die for, and their sandwich menu at the La Romana is pretty awesome.  Cinco has 7 shops throughout Santo Domingo, Punta Cana and of course, where it all started – right here in La Romana. Their latest addition, the Le Spot by Cinco at Plaza Portofino in the Casa de Campo Marina is the chain’s most ambitious shop to date as it is featuring a full lunch and dinner menu as of last weekend! Needless to say that my New Year’s dieting resolution went out the window when Zamira Widmann, owner of Cinco, invited Carla and I last weekend to try it all… and then some!

We evidently needed the very skilled opinion of a child for this tasting adventure, so I took my five year old son, Marcus along with us to taste the new goodies. He is a picky eater as most kids are, so it was the perfect (and objective) addition to our food review team. He was advised that he was going to help us work, talked endlessly on the way there and was given very simple instructions as to how to show us if he liked something or not; the universal thumbs up and thumbs down (and two thumbs up if he really really liked it).  He was very excited!

As soon as he walked in he saw the strawberry gelato and wanted to start “reviewing”. After a quick taste we sat him down to eat… food first, dessert later (he was not too thrilled).

Now, let’s get onto what’s really important here, THE FOOD!

Definitely kid approved! My son loved it and raved about the marinara sauce (he wanted to dip everything in it afterwards). With a big smile on his face this was an immediate thumbs up and I have to concur, they were amazing! They were crispy, and when you bite into them the cheese had the perfect amount of stretch and creaminess.

Maybe it’s something about eating things with your fingers that make kids go wild, but he was totally into these as well. To be honest, not as much as the mozzarella sticks, but he gave them thumb up. The adults’ verdict is that these were very good. What can be wrong with anything that has manchego and serrano ham?  Crispy on the outside and velvety smooth when you bite into them.

We were happy when we saw this coming to our table. I convinced myself I wasn’t completely cheating, it’s healthy hummus, right?

My son wasn’t into it at all at first. With a mozzarella stick still in hand (I mentioned he loved it right?) he said he didn’t like it and wasn’t going to try it. Carla worked her magic and got him to try it. He took one casave piece and dipped it into the red pepper hummus, tried it… opened his eyes as wide as they could get and gave us a two thumbs up. I was pleasantly surprised!

The adults opinion is even better. We asked for seconds. Both were so good and the highlight of it was the toasted and buttery casave. The classic hummus had the right hint of garlic and we wanted to slather the red pepper one on everything.

Marcus didn’t try them (we decided to pick our battles and these were a bit spicy so we let him continue eating his mozzarella sticks and casave). I love spicy food so these were right up my alley. They were really good. Everything was very fresh and the pico de gallo had the right amount of lime tanginess. They were like mini fajitas you could top with guacamole, pico de gallo and sour cream. If you are not a fan of the spiciness, you can ask them not to add it to the carnitas.

The presentation was beautiful as you can see from the picture. Just by looking at the chicken we could tell it would be juicy, tender, not over cooked … and it met all our expectations and then some! Marcus, started with one thumb up but immediately switched to two thumbs up! The mashed potatoes were creamy and soft and the bacon bits and chive were a great addition.

The child reviewer quit by this point. He said he had completed his job and wanted his strawberry gelato. I was actually amazed we had gotten this far! We decided to give him his reward (which made him giddy), in part because the food was so good so far that we wanted to be able to enjoy what was to come sans-whinny 5 year old.

Now back to the ChimiDog – let me give you a bit of a back ground. If you don’t know what a Dominican “chimi” is, here’s the scoop. A Chimi (complete name is Chimi Churris – not the herb-based sauce from Argentina) is in simple terms a Dominican burger consisting of shredded cabbage, tomatoes, meat, ketchup, mayonnaise inside a soft bun. So, a ChimiDog is an updated version of it staying true to its essence, it has a grilled open sausage, with caramelized onions, dijon mustard, and coleslaw (COLESLAW WAS SO GOOD!). It was a great combination of flavors in every bite. Simple comfort food which definitely beats any traditional “Chimi” around.

Like a distant cousin to a pizza, this crepe was just perfect. With the right amount of cheese, tomatoes and fresh marinara sauce we took our time to get through it. Wanting to save some space for dessert we left just a bit. The other varieties of crepes on the menu looked equally good…with so many options and combinations, you might want to go with a group and each order a different one to taste them all! Marcus tried a bite, was certainly amused and gave us a thumbs up, but didn’t hesitate to go back to the gelato.

And now on to everybody’s favorite part the sweets…

While the sweet crepe options were abundant, we tried the Crepe Suzette which is garnished with a delicious orange syrup featuring a perfect mix of sweet and tangy. And to top it all off you can ask for a serving of ice cream to eat with it – WHICH OF COURSE WE DID. Mixing the vanilla gelato, warm crepe and orange syrup was a mouth watering combination.. perfect for those who don’t like desserts that are TOO sweet. I have already planned on going back to taste Dulces Sueños, which has whipped cream, condensed milk, cinnamon and Brandy!

We left the best for last – REALLY! The Apple Cobbler on the menu is Zamira’s family recipe! This was worthy of  two hands up (not just the thumbs)! Remarkably it looked just like the picture on the menu and tasted like heaven on earth. The warm bits of apple, cinnamon, toasted walnuts and vanilla ice cream were perfect. My mouth still waters thinking back to it. I do have to warn you that it is served piping hot, since it goes in the oven. It takes 30 minutes to prepare, but I assure you it is well worth the wait! Order it as soon as you get to the table (it’s the most important part of the meal!) and you will be thinking about it for days to come.

Le Spot by Cinco’s new menu concept does not disappoint! We encourage you to stop by and try some of the incredibly tasty food. Although we tried quite a bit, the menu showcases many more dishes that look mouthwatering as well. Take a look at the gallery below to browse through them all. You will notice that the prices are incredibly affordable and the menu is diverse. We hear Zamira is working on a new breakfast menu which we will be sure to share once it is launched, but in the meantime stop by and try their new lunch and dinner options which we are sure you will love.

Take a look at the menu items and delicious Gelato pictures below taken at Le Spot by Cinco during our visit.

Now with lunch and dinner menu