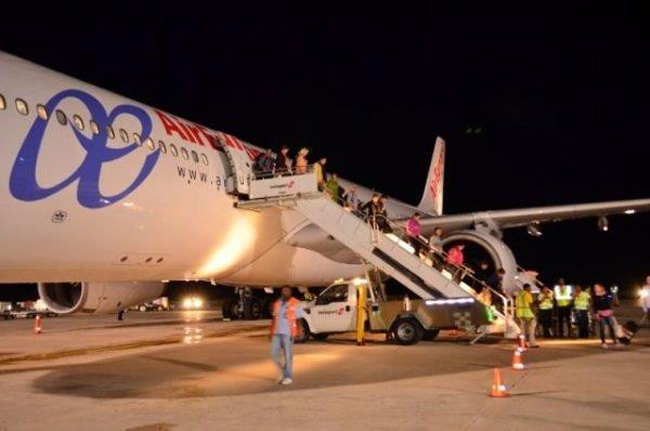 Last Saturday the 30th of November marked the arrival of the first AirEuropa flight from Madrid direct to the Casa de Campo – La Romana airport.

This new AirEuropa flight will directly connect La Romana – Casa de Campo with Madrid, Spain every Saturday until the 19th of April 2014 and every Monday until the 31st of March 2014.

The arrival of the first plane, an Airbus A330-300 with 388 seats was celebrated with great joy at the La Romana – Casa de Campo airport, who not only welcome the plane, crew and passengers with a traditional “water salute”, but also an inaugural event for local VIPs of both Casa de Campo and La Romana, representatives from the La Romana – Bayahibe area, directors of the airport, as well as of course members of the press.

Taking part in the gathering was Francisco J. Perez, general manager of AirEuropa in the Dominican Republic, as well as Luis Emilio Rodriguez, director of the Casa de Campo – La Romana airport, who both said a few words in celebration.

Also in attendance was Casa de Campo general manager Daniel Hernández and Andres Fernández, Commercial, Airport & Port Manager for Central Romana, who we got the opportunity to talk to about this new flight.

“Now that more and more tourists, locals and business passengers, as well as those arriving for cruises departing from the La Romana port, are using the La Romana – Casa de Campo airport, we are confident that AirEuropa will continue to grow the number of flights they bring to La Romana. Especially now that the airport is so well connected; the tourist area of Punta Cana – Bavaro is just 40 minutes away, while the capital city of the Dominican Republic Santo Domingo, is little more than an hour away.

In addition to this flight, arriving every Monday and Saturday from Madrid, Spain, other flights arriving to the La Romana – Casa de Campo international airport include: