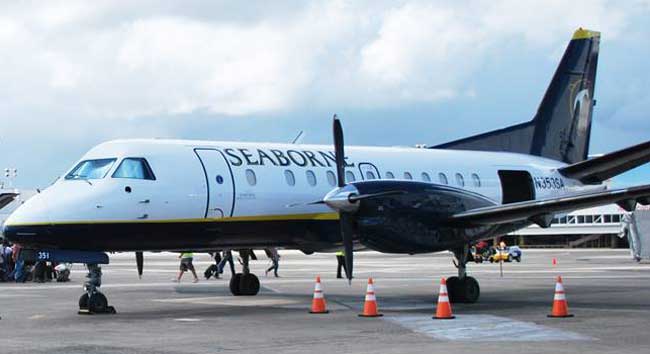 Seaborne Airlines based in St Croix, have just announced that they are opening a new route, their first to the Dominican Republic; a non-stop flight between San Juan, Puerto Rico and the La Romana – Casa de Campo airport.

The new route between the Luis Muñoz Marín International Airport in San Juan Puerto Rico (SJU) and the La Romana – Casa de Campo International Airport in La Romana will begin on Thursday, December 12th, 2013, initially operating every Thursday and Sunday. Then from March 15th, 2014 the schedule will be increased to seven days per week – offering travellers between La Romana and San Juan a daily flighht between the two destinations – fabulous news for Casa de Campo villa owners from Puerto Rico and travellers connecting via San Juan to the US or Europe.

Seaborne will operate a roomy 34-seat Saab (pictured right) with two pilots, a flight attendant and in-flight service on the route. The initial flight schedule will be every Thursday and Sunday, departing SJU at 1:15pm and arriving LRM at 2:25pm and departing LRM at 3:15pm and arriving SJU at 4:25pm. [From March 15th 2014, flights will operate daily on the same schedule.]

To commemorate the launch of this new route, Seaborne is offering fares as low as US$129 one way, with taxes included. [Bookings must be made by November 30th for travel by March 6th,2014. Flights can be reserved at www.SeaborneAirlines.com, Expedia, Travelocity or through your local travel agency.]

“We are very pleased with Seaborne Airlines’ announcement of a new San Juan – La Romana route. Improving air access is a key component to increasing passenger visits to Puerto Rico from the current 8.5 million to 10.0 million annual visits within the next five years. Furthermore, we are excited to be increasing air traffic with the Dominican Republic as we look forward to strengthening commercial ties with our neighbors.”

Great news! Looks like we can all start visiting San Juan on a much more regular basis!