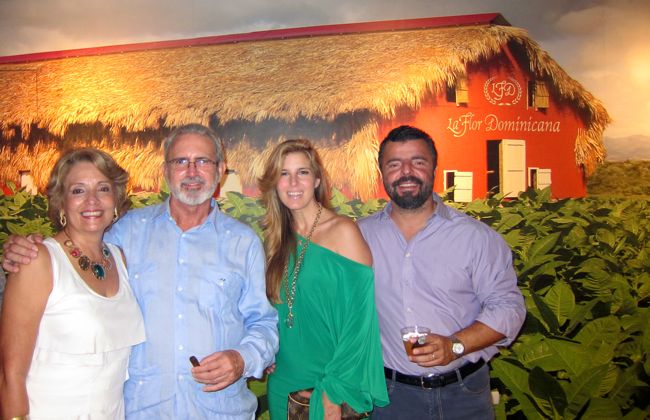 Cigar enthusiasts mingled with guests from both the La Romana and Casa de Campo communities, whilst toasting the future success of this project, which proudly showcases the Dominican Republic’s cigar making prowess – as the world’s #1 producer of premium cigars.

Guest of honor at the event was José Seijas, a local cigar making legend, who until recently was the vice-president and general manager of the Tabacalera de Garcia, the world’s largest hand-rolled cigar factory, located just outside of Casa de Campo in La Romana. José, creator of “Mi Dominicana” and the “Jose Seijas Signature Blend” cigars among others, was joined by Litto Gomez, founder of the La Flor Dominicana cigar factory, acclaimed by Cigar Aficionado Magazine to be “the most creative manufacturer in the business, consistently producing some of the hottest brands in the market”.

As 2 of the biggest names in cigar making in the  Dominican Republic, José Seijas and Litto Gomez accompanied by Litto Jr. cut the ribbon and thus declared the La Flor Dominicana Factory Tour and Cigar Megastore officially open for visitors. Following which the gathering continued with champagne, whiskey and rum, as well as, of course cigars.

Also in attendance at the prestigious event were brothers, Ruben and Charly Gonzalez, as well as Ricardo Sejias, who along with José Seijas and Litto Gomez represent the team bringing this great tourist attraction to La Romana.

“It was an awesome event. Our Factory Tour is now open to teach tourists and visitors to our country about Dominican tobacco and the art of hand made cigars.”

The following photos were taken during the inauguration of the La Flor Dominicana Factory Tour and Cigar Megastore in La Estancia on Friday the 21st of September 2012:

La Flor Dominicana was founded in 1994 in Santiago, Dominican Republic under the direction of Litto and Ines Gomez and over the years Litto has developed a portfolio of innovative quality blends, shapes and sizes which fulfill the ever-changing needs of today’s cigar smokers.

At the all new “La Flor Dominicana” factory tour in the La Estancia Golf Resort in La Romana you will be able to see the proud handwork of the cigar industry’s most experienced craftsmen and women as they produce La Flor Dominicana’s masterpieces, all under the watchful eye of Cigar Aficionado’s Hall of Famer, Jose A. Seijas. Creator of blends for world-renowned brands such as Montecristo, Romeo y Julieta, H. Upmann, VegaFina, and many others.

The “La Flor Dominicana” factory tour follows the path of the tobacco leaves from the fields to the packaging of premium handmade cigars. Guests walk into the tobacco preparation areas of La Flor Dominicana where leaves are conditioned and classified and continue to the blending room. Next comes the manufacturing floor where guests will witness firsthand the cigar making process: bunching, rolling, cigar aging and packaging.

The Cigar Country Megastore is the largest cigar store in the Caribbean. With the largest selection of premium cigars, best prices, and the most knowledgeable staff. When you visit La Flor Dominicana, you are sure to receive the personalized service needed to select the best cigars for your enjoyment or gifts to take back home.

The Cigar Country Megastore – the largest in the Caribbean