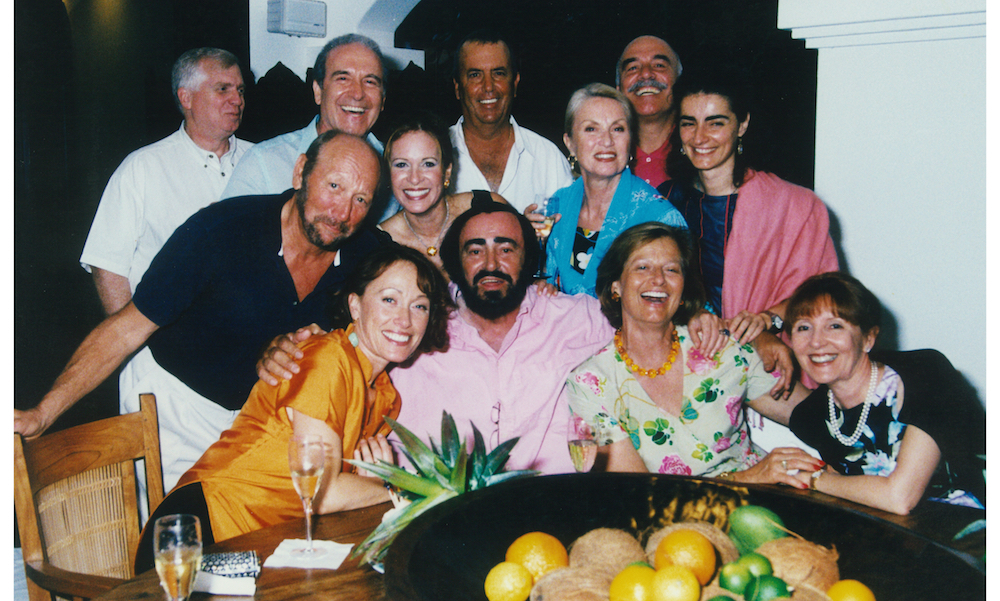 It’s hard to know what to say when those we love suddenly depart. The recent loss of our dear friend Luisella Givigliano was just such a case. Luisella was an incredible person who was loved by so many and, to us personally, was like family. It’s impossible to not remember her incredible laugh, generous and loving nature.

Luisella, we miss you greatly.

Maria Luisa Pelliccione in Givigliano, for everybody in Casa de Campo always and only “Luisella”, was born outside Rome, Italy.

She moved to the capital very young and once she finished her studies, she went to work for a real estate company where she was hired to develop “Giannutri”, a small island near Isola d’Elba. Within a year and a half, she had sold every lot, house, villa in the entire island, including her own apartment.

She was then approached by the Credit Suisse realtors co. to do the same in “Albarella” a bigger island below Venice.

At the same time, she had opened a fashion shop in the elegant area of Parioli in Rome. For that reason on September 15th, 1976 she was in Florence, to view the collections at Pitti and there is where we met the first time.

The next day I tried to arrange a date and it was like a movie: I was in Milano, I called her in Rome at 5 pm asked her if she wanted to have dinner, she would not believe I would make it but I flew there and we met again. We were walking in a square when I heard a motorcycle drive past her and I thought they had grabbed her purse. I went after them, knocked them down, they ran away and only then did I realize that she had kept the purse. My right leg was shaking so much that we called the evening off and I took a flight back to Milano.

Two days later we tried again and we had a great time. I went back to New York where I lived and called her (a $ 300 call, at the time there was no other way to communicate) and asked her to join me. She came, things were not great, she left after a few days. We repeated the same story two more times until she finally decided to stay.

From that day on, we never left each other’s side for 43 years.

I was distributing Italian designer collections for men in the States, Canada, Mexico, and South America. She was an expert in women’s fashion, so we opened a small showroom in Manhattan, then 6 months later a bigger one in front of Carnegie Hall, then we took three floors on 56th street and 5th avenue. Near the Trump Tower, and we stayed there for 35 years. I believe all together we launched about 80 to 90 fashion collections with resounding success during that time. Those were the “Golden-Reagan” years, the business was booming and for us, money was not important, it was only a tool to enjoy life and friends. Our routine was basic: get up early, go to the showrooms, go home at 5:30, sleep until 11:30 go to Studio 54 with friends, eat and dance until 5:30 am, go back home, take a shower and go to work.

We were young then!

Luisella was so friendly and joyous about life that she would make moves sometimes unexpected like the time we went to a benefit at the Chelsea Pier where Sofia Coppola, the actress, was giving a speech. Having never met her, she approached the stage and started talking to her like they were old friends… And they had a long conversation. It was hilarious.

We began traveling to Mexico, where we met some great friends, like family still today, and with them, we started doing two fashion shows a year in Mexico City. It was very successful. We traveled to Brazil several times, then Machu Picchu, Ecuador, Galapagos, which was the most extraordinary trip we have ever taken. We went to the Amazon Rainforest, where the river can be from 6 miles to 22 miles wide, and stayed there with the local Indians for a while.

In 1985 we were supposed to go to Tahiti but there was a storm and our agent advised us about the Dominican Republic. We did not know where it was, as we knew Hispaniola but that was all. We had a reservation with Dominican Airlines, ‘the fabulous one’…. at Xmas. The flight was delayed 19 hours, we finally arrived in Santo Domingo, but our luggage was temporarily lost. The president of CDC, with whom later on we became very good friends, found out about our problems and provided us with t-shirts, shorts, etc. and invited us for dinner at his house. When we arrived, Mike Bongiorno and his family were also there as guests. At the time he was a big TV personality in Italy, and we enjoyed the company.

The following year we came back and I discovered my love for riding horses came full circle when I discovered polo. We made an agreement: we would buy a house near the beach as Luisella was a sea lover and I would play polo, which I did for 30 years.

We bought in Los Lagos and, at the time, on the other side of the street, where Los Mangos is now, there were fields with cows and horses.

We were having a great time and she was always inviting people at least 3 times a week. Once, at the president of CDC’s house, for her birthday, she was asked to help and receive the guests coming in. To her greatest surprise, Luciano Pavarotti came in and sang her happy birthday. She cried. We started sharing a few jokes and stories; it was a great evening.

We had been friends with the Maccioni family, owners of the famous Le Cirque restaurants, for over 20 years and we’re glad to see them come to Casa de Campo. 4 years ago they invited us to their place in NYC for a small special event with “Il Volo”, Paul Sorvino the actor sang with them, Woody Allen was there with his wife and we had a fantastic time. We asked the group to come to Casa de Campo but their schedule was full for the year.

We met Andrea Bocelli and his wife Veronica and they came to see us at the ranch at CDC where I had my stable because he rides beautiful Andalusian white ones, even if he can not see. We are still good friends and keep in touch.

Eros Ramazzotti, the Italian singer, sat with us one night in Casa de Campo but we did not know who he was until he sang for us. Amazing.

Another time we met Richard Branson: an eclectic man who explained to us that he had made his first million dollars at 18 with Virgin Records, was going to cross the Atlantic with a balloon (which he did) and was going to organize trips in the sky (which is doing now) and there were other fantastic memories, as Luisella was a fabulous host and many, many friends came to visit, stay with us as guests, many times.

The years passed and we enjoyed Casa de Campo more and more: lots of activities, the beach, Altos de Chavón where we had many Christmas dinners and New Year celebrations. I played polo for a long time but Luisella, who used to come and watch, got too worried about the many times I fell and broke something on my body, that she refused to worry and waited home!

We witnessed the growth of Casa de Campo from 300 villas in 1985 close to 1800 just a few months ago and expanding, a sign that this place is considered “the resort” of the Caribbean. As Aldo Gucci said to me once, “I do not care if they speak good or bad about me, the important thing is that they speak,” CDC is always on everybody’s minds and talks, and there is no other place that is as complete as this.

Unfortunately, 3 months ago, Luisella passed away and we hope she is in heaven.

I want to thank personally all the people who have contacted me, written and called.