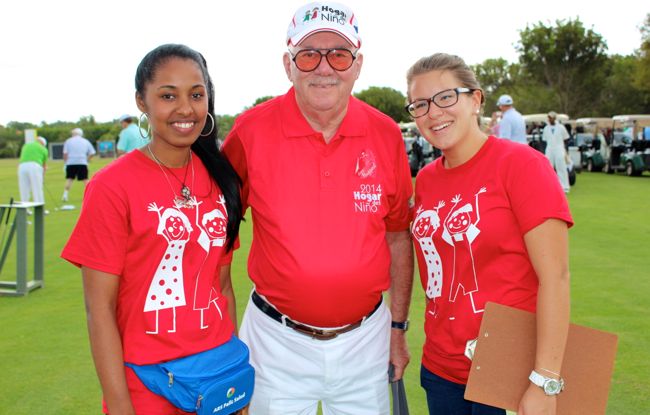 With “free hugs” for RD$100, their own hashtag (#soypbo) and even a little fancy dress… the 17th annual Hogar del Niño weekend proved to be just as fun, fresh and innovative as we have come to expect from the charity who educates more than 1500 children at their school and daycare centre in La Romana.

The 17th annual Hogar del Niño weekend got started on Friday February 14th with a community visit to the Hogar del Niño, a beautiful opportunity for the charity’s numerous supporters to enjoy the smiles and love of the children, and to see firsthand all the excellent work the cause does every single day. As well as, later that afternoon, the Homes and Gardens Tour, which visited some of Casa de Campo’s most magnificent villas; Barranca Este #65, Vistamar #23, Cacique #2, Bahia Minitas #13 and Bahia Chavón #1.

But the celebration really got going bright and early on Saturday morning the 15th of February when the La Romana Country Club became the base camp for all the varied events and activities! Starting at 8am, there was the tennis and golf tournaments, as well as the departure of the MTB bike marathon which led participants through the Casa de Campo resort and back to the La Romana Country Club.

In the afternoon, the action continued with the second part of the golf tournament (an activity that proved so popular, participants teed off at both 8am and 1pm), the Zumbathon and the finals of the polo tournament.

Then the grand celebration ended back at the La Romana Country Club, where guests were welcomed into the gathering by the Hogar del Niño’s army of cheerful volunteers, as well as the “What does the Hogar mean to you?” gallery – images of various supporters of the Hogar accompanied by heartfelt thoughts and feelings on the cause.

Set up around the pool, the event glowed in the light of the moon, where guests enjoyed dinner, drinks and the prize-giving ceremony, before dancing the night away to live music and later with DJ Luz.

A fabulous celebration for an even more fabulous cause!

We were of course in every event taking lots and lots of photos, so you can look forward to seeing all of those soon, in the meantime, here is just a sneak peak of all the fun…

Remember – TONIGHT is the 3rd “Concert of the Sport & Cultural Project” – Casa de Campo villa owners Mario and Nicoletta Galletto invite you to join the chorus for the children with a performance by the “Camerata Coral Dominicana”, a choir of more than 30 Dominican musicians, as well as soloists, to be directed by José Enrique Espin S. Click here for details!