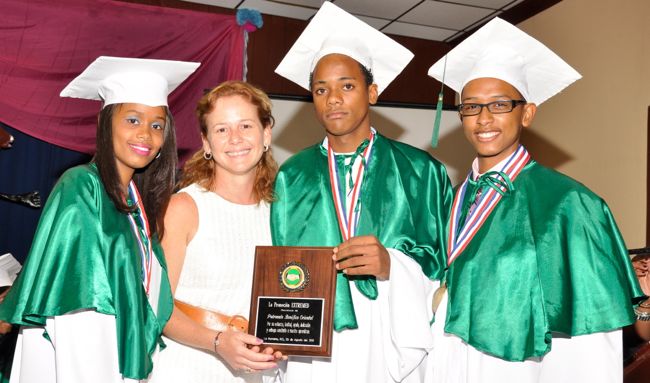 The Hogar del Niño educational and daycare center in La Romana recently celebrated its 5th high school graduation, a moment of great pride for not only the 29 graduating students, their friends and families, but also the many Casa de Campo supporters of the cause who also took part in the ceremony.

The celebration which took place at the Club de la Costa in Central Romana, La Romana, began as the 29 graduates proudly paraded into the hall in white and green graduation robes and everyone in attendance stood for the Dominican national hymn.

During the ceremony, which included a speech made by Xiomarita Matos, president of the foundation, many of the graduates were recognized with special awards.

The award for academic excellence was given to Carlos Rodríguez, who thanks to his excellent grades won a scholarship to study law at UNIBE university in Santo Domingo.

As a result of the generous support of Casa de Campo villa owners, companies and many others, the Hogar del Nino’s Scholarship program was able to award 9 students; Ambar Rodríguez, Génesis Yorkelia Pérez Edwards, Paola Cristal Avila Silvestre, Annie Estephany Encarnación Herrera and Juana De Morla Nuñez with scholarships to continue their education in universities throughout the country.

Among the many Casa de Campo villa owners in attendance was Alessandra Avanzini, who as a longtime supporter of the cause was tasked with delivering the words of motivation. Alessandra is also the co-founder of the monthly Cafe de la Leche gatherings we enjoy every month, and which gather milk supplies for the Hogar del Nino’s crib room.

Making a special guest appearance in the ceremony was Geuri Garcia, a graduate of the Hogar del Nino who having won a scholarship has been studying architecture at UCE university, with such success that he was recently selected to participate in an exchange program with an Argentinian university doing research in Buenos Aires for his final thesis.

Congratulations to all the graduates of the Hogar del Nino!

Supporting the Hogar del Nino is fun! Check out these upcoming events and join us in supporting change through education!