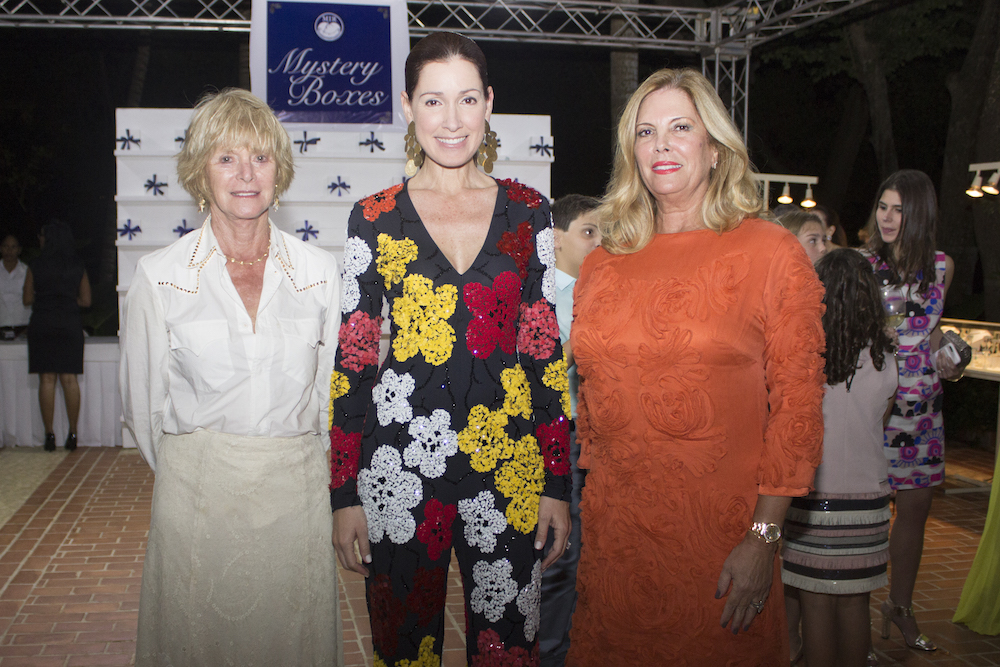 For the second year in a row, we witnessed the extraordinary work of Naeem Khan as we celebrated the children of the Fundación MIR at the Magical Splendor Gala, hosted by Alfy and Raysa Fanjul on January 14th. In its 27th edition, the annual gala benefitted the social and educational projects of the foundation which runs three schools in La Romana. The evening saw plenty of residents and guests of the Casa de Campo community dine and dance the night away, even amidst a sprinkling of rain at Casa Grande.

Guests were greeted by singing students as they entered the Fanjul family home and made their way to the courtyard where they posed for plenty of photos (see the galleries below!!) and sipped on champagne and Chivas and Ron Atlantico cocktails. The area was equipped with a Mystery Shopping Wall and jewelry displays by RDA Joyas and Norma Rivera de Vargas. Guests who purchased pieces from the collections contributed to the Fundación MIR, and those who shopped the mysterious wall were gifted items from Saks Fifth Avenue.

An elaborate transparent tent on the property sheltered attendees during dinner at the onset of rain but afforded all a great view of the enormous trees above. Walking to the tent through the trees’ lights and lanterns brightening the way created a very magical, whimsical setting. This theme was carried out in Naeem Khan’s Spring/ Summer 2017 prêt-à-porter collection where florals made a striking statement throughout the night.

Known for his impeccably beaded gowns, Khan shifted a focus to bias-cut dresses this season. In color-blocking patterns, models slinked down the runway in gowns that effortlessly draped over their curves. It was a twist on his usual style, but not a surprise given the designer’s mentorship with Roy Halston Frowick in the 1970s — see our interview with him on the subject here. We were further reminded of the 70s as bright, yellow fringe dresses and jumpsuits debuted along with oversized botanical prints, which could be seen on Raysa herself. Khan’s collection graced the runway to an enchantingly delicate melody, and so ensued a very dreamy and fluid collection.

Again this year, four dresses were graciously donated by the designer in an auction following the show to some very lucky Casa de Campo ladies! Close to US$50,000, the generous contribution will support the many efforts the foundation has planned for this year. Khan even agreed to donate a bridal gown!! With custom-made gowns by him starting at US$50,000, it’s an enormous contribution the designer will honor for whomever wants their daughter to walk down the aisle in an exquisite, one-of-a-kind gown and greatly impact the work of the Fundación MIR. Khan’s adoration for the children and acknowledgment of the foundation’s continued effort can be witnessed in his special visit to the school which took place prior to his show at Casa Grande.

A big thanks to the Fundación MIR, along with Alfy and Raysa Fanjul, who outdid themselves again this year in a wonderful night of charity and fun. The following galleries of pictures were taken on Saturday, January 14th at the Fundación MIR Magical Splendor Gala by Laura Perdomo:

In the lead up to the Fundación MIR’s Magical Splendor Gala, Naeem Khan first visited the Fundación MIR’s schools. Located in La Romana, the non-profit organization which was founded in 1988 has helped improve the lives of a growing number of children and families through its educational services and programs. Read more about the day’s presentation by the students and gift-giving ceremony here.