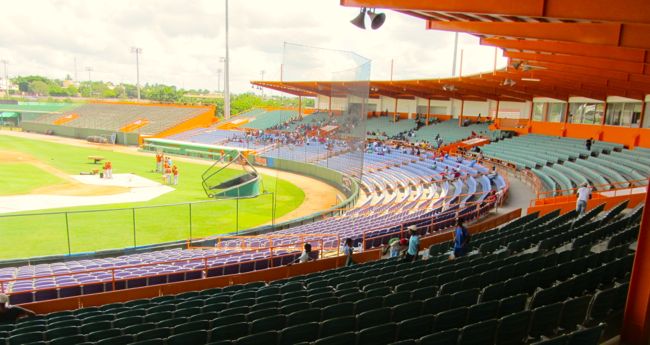 The home of local La Romana baseball team, “Los Toros del Este” has been totally renovated, from its facade, the pitch, the dressing rooms and offices… the facilities of the entire Francisco A. Micheli stadium are now akin to Major League stadiums across the United States – a premier level of comfort never before seen in the Dominican Baseball League.

For the Los Toros peloteros (players) as well as those from visiting teams, they will now “play ball” in a completely renovated field with new grass and a special automatic irrigation system. They also have a significantly bigger and more comfortable Clubhouse, including new showers and a new training area with massage tables, a whirlpool and much more.

With the official inauguration of the Dominican Baseball League this Friday October 18th, Los Toros del Este have already started preparations, with their pre-season camp and training which opened at the newly renovated stadium on Monday the 30th of September.

INMORTALES magazine (issue #2 to be published very soon) was recently granted access to all departments and facilities, exclusively, taking the first images to bring to you the first look of the new Francisco Micheli Stadium…

The front of the stadium has been completely renovated. They have replaced the old windows with a sliding system that gives elegance to the building, and it has also been re-painted a much brighter orange – the team color.

The beauty of the new green turf is the first thing that you will notice when entering the stadium. The turf is brand new and to maintain it to the highest level, an automated irrigation system has been installed which sprays the entire field area every few minutes.

The bullpen has been redesigned, and now is more comfortable and spacious for pitchers warm-ups.

Just walking down the tunnel that leads to the club house of “Los Toros” you can see that everything has been re-done. From the ceiling lights to the floor tiles, literally everything is new.

Inside it feels like we are in the dressing room of the Baltimore Orioles – with many new modern home-comforts; custom boxes, padded chairs, carpets, fridges, LCD monitors, a large living room and office, making it the most modern in the Dominican Republic.

The visitors cave has also been expanded and re-modelled, with new lockers, seats, carpets and air conditioning, manager office and coaching, all in the style of the big leagues.

The upper area of the grand stand, including the roof, was entirely refurbished, and although no new seats were added, the difference in look and feel is incredible.

The office area is completely new. Nothing remains of the old set-up. Now access is by glass doors. The press box has been expanded and renovated to make the work of the press more comfortable and efficient.

How gorgeous is our stadium, all painted orange and modernised! There can be no doubt that “Los Toros” are ready to face the challenge ahead – to bring home their 3rd championshipship crown!