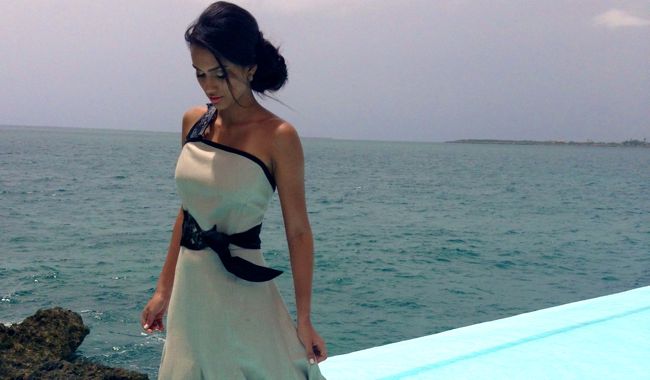 Having just launched a new collection, Jenny Polanco who has fashion boutiques in both Altos de Chavón and the Marina Casa de Campo chose Casa de Campo as the perfect location for the shoot. Jenny Polanco’s classic clean-cut style is the embodiment of resort chic so she couldn’t have chosen a better location than the resort.

Throughout the day, Former Miss Dominican Republic, Dalia Fernandez modelled a range of outfits and accessories at 2 stunning locations; the Marina Casa de Campo and a private oceanside villa in the classic Punta Aguila neighborhood of Casa de Campo.

Taking a hands-on approach to the shoot was Jenny Polanco herself, who in the past actually studied and taught at the Altos de Chavón School of Art and Design. Jenny spent the day styling, re-styling and directing the shoot to make sure the clothes shone in the best possible light.

Being showcased by Dalia Fernandez in the photo shoot was a stunning linen brown and black dress with gorgeous horn detailing, a beautiful long white day dress with cut-out detail, as well as the 2013 version of the classic Jenny Polanco blouse.

Accessories included purses from the Haiti collection and the JP exclusive snake skins, as well as timeless pieces from Bentrani and Cartier, and sandals by Tory Burch.

“The “carved horn” collection gives prominence to the Dominican Republic’s artisanal wealth with the aim to showcase these extraordinary pieces with a modern twist which makes the wearer identify with the craft and the cause.

This collection is part of our Fall 2013 designs, and will be in stores from November. The pieces are all limited edition due to the nature of the carved horn detailing. This exhibition will also be showcased at Haiti Fashion Week starting next Saturday the 21st of September.”

The following collection of photos were taken “behind the scenes” at the Jenny Polanco photo shoot with former Miss Dominican Republic Dalia Fernandez:

We last saw Dalia Fernandez in Casa de Campo during the Fundación MIR Magical Spelndor for Life event in January 2012 – click here to read our interview with her!

An interview with Jenny Polanco: “I am inspired by everything Dominican”

Considered to be one of the Dominican Republic’s most acclaimed designers, Jenny Polanco is so enthusiastic, creative and passionate about her work, that it has transcended her very essence. With more than 3 decades of experience, her zest for her art and commitment to her clients has allowed her to develop beyond herself and her designs and into not only a brand, but a concept, a symbol of forward thinking that combines her passion for design with her ingrained need to help others.

Click here to read our interview with Jenny Polanco!