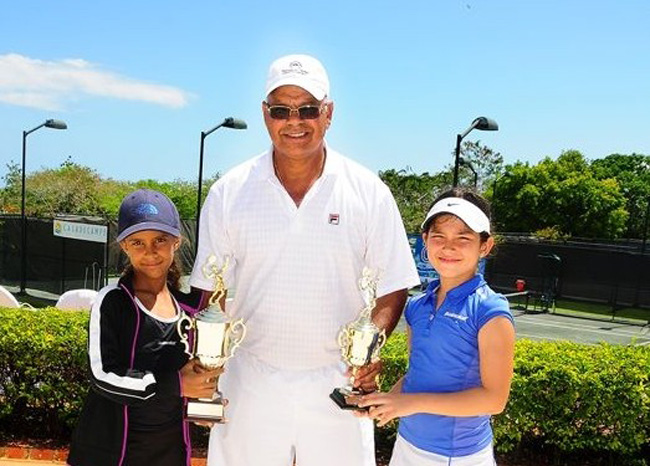 The Sporting Life here at Casa de Campo is not just about the resort’s world class facilities for golf, tennis, equestrian, shooting and more, but what makes Casa de Campo truly remarkable is the experience, knowledge and enthusiasm of the people who work here – especially the directors of the sports departments.

Here we bring you an interview with Emilio Vásquez, Casa de Campo’s director of tennis who has been working here in Casa de Campo for more than 30 years.

@cdcliving: Tell me about your life, your career… who is Emilio Vasquez?

I started as a bolero (ball boy) at the Santo Domingo Tennis Club in 1969, and besides playing tennis, I also played baseball at the time. My dad always wanted me to play baseball, but what really called me attention was tennis, so first I had to convince my father that I really wanted to dedicate myself to tennis. After that I learnt to play very quickly, so much so that after just 6 months playing tennis, I reached the same level as my teachers.

In 1971, when I was only 16 years old, I was the No. 1 player in my age category, and the following year I became the 2nd best tennis player in the Dominican Republic; it all happened very fast and I was certainly very pleased with my progress.

Starting in 1972 I represented the Dominican Republic in the Central American Games and Pan-American Games, participating in almost all events. In 1977, I received a scholarship to Hampton University, located in Virginia. But before that, I came to Casa de Campo with Tony Rush, an excellent player at that time, who were visiting the resort with other players to give doubles exhibition. Carlos Pellerano was the chairman of Casa de Campo back then.

In 1979 I moved to the United States. Later, Mr. Alfosno Paniagua invited all players who were representing the Dominican Republic at the Pan-American Games to Casa de Campo. At that time, the director of tennis at Casa de Campo was John Rivers, a man with experience, and he asked me to stay here as his assistant. So I decided to stay in the United States to finish college, but after six months I returned here to Casa de Campo and from 1980 onwards I’ve been here- a total of 34 years of service.

@cdcliving: What has been your greatest achievement?

@cdcliving: How has tennis in Casa de Campo changed over the last 3 decades?

There are many more players now, tennis has improved a lot. Among our players we have a representative of the Davis Cup [Pedro Nolasco] and we have many children who are playing at a very high level, they are the youth who will be representing the Dominican Republic in national and international events.

@cdcliving: The Casa de Campo International Tennis Tournament is the longest running tennis tournament in the Dominican Republic. What can you tell us about this event?

I remember when I began playing in Casa de Campo in 1980, I wanted to participate in the tournament because it was a very successful tournament, in which many important Santo Domingo personalities would compete. Back then it was called the “Siboney Cup”. I proposed that they create an “Open”category, a proposal that was accepted in 1983 after which I was proclaimed champion of on various occasions.

The Casa de Campo International Tennis Tournament is this year celebrating its 37th edition and with the participation of more than 200 tennis players from around the world will be played at Casa de Campo’s La Terrazza Tennis Club from the 28th to the 31st of August.

@cdcliving: What is your greatest memory of the time you’ve been at Casa de Campo?

Spending time with players and personalities like Oscar de la Renta, as well as with owners and executives of the Central Romana Corporation, with whom I get along very well. It has been a very long and nice experience. I came here for 2 years and I have been here now 34!

@cdcliving: Exciting! Tell us more about the celebrities.

I had the great privilege of playing with Oscar de la Renta, who played every day at 5pm, who designed the dress for my wife when I got married.

I also played a lot with Robert Redford when he was filming the movie Havana. I played with Michael Douglas, the Bushes, Bill Gates, Carol Stone from Baywatch; the list continues with the boxer Marvin Hagler, who is a sports legend, Tito Trinidad was also here with us.

The 1st GJB Tennis Tournament for the Ball Boys Foundation

@cdcliving: What does “The Sporting Life” mean to you?

It is a new creation that has brought us the Casa de Campo revolution, I think it is extraordinary, it’s new format to us and in particular fascinates me, because “The Sporting Life” says it all.

Most exciting of all is that in the month of November [6th-9th] we have confirmed the appearances of John McEnroe and Jim Courier, who were excellent players in their prime.

@cdcliving: What is the future of tennis in Casa de Campo?

We hope to bring more international tournaments, also in my plans is to bring back the Davis Cup.

Bringing a foreign tennis academy here has also been discussed; we are already making connections with an Academy in Barcelona, Spain.

There can be no doubt that one of the most charming aspects of the La Terraza Tennis Club, is the boleritos – the ball boys. Polite and friendly, the ball boys do a great job for those who use the tennis club, but thanks to Emilio’s hard work and dedication, they are also fully prepared and educated for life beyond La Terraza.

@cdcliving: Emilio, tells us about the ball boys program.

They usually start when they’re ten or eleven. They start as boleros, then they become players, and after players they become junior pro’s; so far we have 8 junior pro’s and 14 players. I don’t think any club throughout the Caribbean has as many pro tennis players.

They are taught English, and we require them to attend school [in fact the Ball Boys Foundation pays for scholarships for the majority].

Among children who have been educated here we have Pedro Nolasco, whose father was a medalist at the Olympic Games in boxing, Pedro is our #1 player, having represented the country in the Davis Cup and recently won the Rick McDaniel tournament.