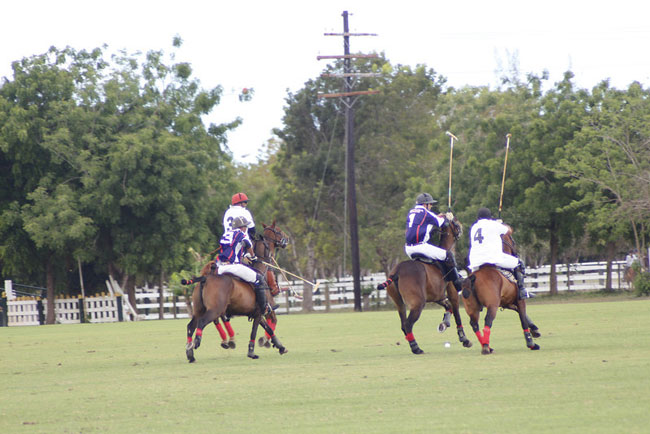 The two very exciting and fact-paced matches ended in victory for El Pitirri and Chamuscada who will now go head to head in the finals to take place at 4:30pm, tomorrow Saturday April 19th. The low goal final will be played at 3:30pm, while the festivities at the Casa de Campo polo fields are scheduled to start from 3pm.

Other key elements of the finals and celebration will be the Argentine Asado (BBQ Gaucho Style) catered by Casa de Campo (click here for details), as well as the #CasaLife contest – your chance to win a flight to New York with jetBlue, a helicopter ride with Heli-Tours and much more! To take part in the #CasaLife contest click here!

Now over to Calixto Garcia-Velez for his blow by blow account of yesterdays excitement..

Great polo, drama and a surprising upset by Calixto Garcia-Velez

Well a very tumultuous day with great polo, drama and a surprising upset….

In the first semi-final match between two evenly matched teams, Chamusacada vs SBG, we witnessed some very fast polo and some incredible shot making. What started as a possible blow out by SBG over Chamuscada ended in a disappointing, yet exciting finish.

SBG took a commanding 4-0 lead on very fast play with great teamwork. SBG seemed to have the upper hand with superior horses and played with great marking of their men as they passed the ball flawlessly to each other to overwhelm Chamuscada. However, mental mistakes crept in bit by bit and they gave up several easy goals on foul shots that seemed to renew Chamuscada’s spirits as they inched their way closer on the scoreboard.

I believe this was the best game Rafa Garcia and Pedro Pablo Cabrera played all season, as they played well above their handicaps making some remarkable plays on opposing players much higher ranked than themselves.

Heriberto Constanza and Juan Crespo complemented each other very well, but in the later chukkers they made several mental errors that led to Chamuscada’s comeback.

Dennis Santana played some tremendously powerful passes up to a very fast Cesar Crespo and Chamuscada was making a comeback. Alejandro Tirado at seventy years was amazingly aggressive and active.

And then the play that decided the final outcome of the match….

A whistle was blown on a Chamuscada player for a foul that should have meant a penalty #4 in favor of SBG and a chance to get a three goal lead in the last chukker. However, after both teams had been warned by the umpires that no more verbal outbursts or arguing on the field would be tolerated, a player from each team was ejected from the game after an altercation ensuing in a throw in.

Chamuscada took advantage of the situation and confusion and scored the next three goals to put their team in the finals.

An unfortunate end to a very good polo match…

Right from the start there seemed to be a weird vibe that something was in the air for this match featuring 3-0 Lechuza vs 0-3 El Pitirri.
I’m not sure if the Lechuza players were a bit overconfident or if Pitirri Patron Rafa Perez Diez put some extra incentive to his players, but these were not the same two teams that played each other last week.

Lechuza had trouble from the start maintaining focus and their 2 goal handicap lead was quickly erased. An inspired Flaco Maldonado and Julio Lopez showed up today and finally played the way they are capable. Lechuza had several chances, but were very inconsistent with the ball handling.

Very well mounted and out playing Pitirri, Lechuza dominated the play but could not seem to make contact with the ball on the more important occasions and today Pitirri came to play. They took advantage of every break and a much improved Julio Lopez spent the whole match pressuring Lechuza’s solid back Anton Tejeda. With Tejeda having to focus solely on defense, Johnny Alvarez and Alfredo Vargas had to work harder to make offensive plays. Due to the heavy pressure by Carlos Cortes and Flaco Maldonado the Lechuza team started to break down and missed key shots and scoring opportunities that would have won the game for them.

Kudos to a very inspired El Pitirri Polo Team for coming up big when they needed too and securing a spot in Saturday’s Final.