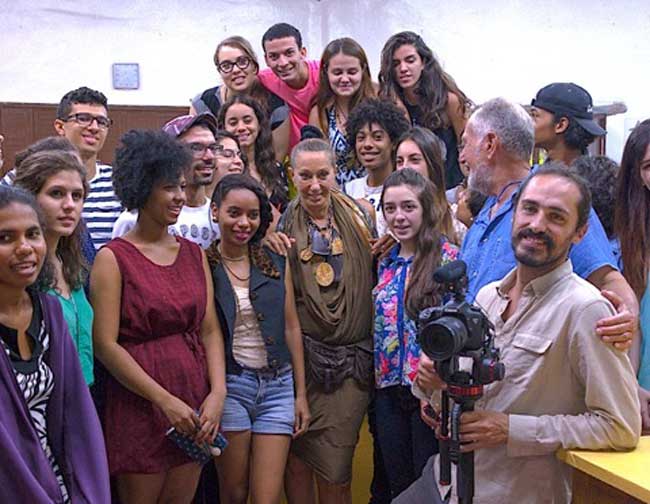 Donna Karan is probably best known as the designer responsible for outfits that contain yards and yards of the plushest, softest cashmere imaginable. The images of her models swathed from neck to ankle in pale taupe or charcoal-tinted luxury fabric are the epitome of fashion sophistication. Her couture and DKNY lines are world-class. Behind it all is the inimitable Donna. And Donna has an obsession with Haiti. She is determined to make a difference there. Since the 2010 earthquake, doing something for the people of Haiti has become a personal mission.

Donna Karan studied fashion at Parsons, in New York City. She heard about The Altos de Chavón School of Design, the Parsons affiliate on the other side of the island from Haiti, and got interested. The next thing I knew, I was volunteered to fly over to see what she was doing in Haiti, consult with her, and bring her back to Altos de Chavón for a day or two to see our school and take in what we’ve been doing. There was crossover.

So bright and early on Tuesday, October 22, I took off from the Joaquín Balaguer International Airport in Santo Domingo on a twin-propeller 19-seat plane, and in 50 minutes I was in Port-au-Prince. I’d been there four or five times before, but not since the devastation of three years ago.

The first thing I noticed while waiting to be picked up by Donna’s driver was how dusty everything was. The next few days were gritty in more ways than one. I was driven in an SUV at high speed through the rutted and stone-strewn streets of Port-au-Prince. Looking through the window of my air-conditioned capsule, it all seemed like a movie—or, rather, a documentary.

I met up with Donna in Croix-des-Bouquet, a town just southwest of the capital. This town is the center of craft production, especially iron craft, the art of cutting flattened iron oil drums into involved arabesques, symbolic works that conjure everything from the gods of voodoo to scenes of daily life. The work is splendid, the working conditions medieval. Donna was there in the thick of it; in soft leather boots, leggings, tunic, a hand-dyed (in Haiti, of course) six-foot-long silk scarf, belts, and sashes, she looked like a Tuareg tribesman in the 90-degree heat. Her energy exploded in all directions. The heat, the dust, the fumes all seemed of no consequence to her; her enthusiasm cut through them like a saber.

Donna showed me, and her entourage—jewelry designers from California, department chairs from Parsons, and a cadre of Donna’s facilitators, French and Creole speakers—the human and artistic contents of all the little shacks that housed different craftsmen, each with his own style and thematic approach to the art form. She blurted out, “I’ve got to get them to find a way to do better finishes, better patinas, if we’re going to be able to sell this work on an international level.” Time and again she repeated the goal. That was her mission: to bring Haitian handicraft to a world-class level, leaving behind the airport-souvenir aspect that much of it seemed to display.

For the next several days I would see how much she had invested in making it better, and I’d meet the scores of people involved in transforming Haiti’s traditional and often primitive craft into contemporary, sophisticated primitive craft. Donna’s Urban Zen stores in New York are repositories of hand-made, one-of-a-kind pieces from Bali to Haiti.

The cow-horn workers were next on the list. As the patina was a problem in the iron workers’ camp, the challenge with the cow horn was patina versus polish. It needed not to shine but rather to have a matte luster. The cuff bracelets needed to be laminated so they were very thick. Huge burlap sacks of rather nasty raw cow horn were dumped on the floor in front of us, and Donna gleefully shuffled through the mess, culling the pieces with the most character. “Polish them, but don’t make them shine too much”—that was her refrain.

There are plans for a Donna Karan–initiated craft school and showroom in Port-au-Prince. The prototype is run by Paula Cole, whose Haitian husband runs a T-shirt factory. Paula was born in Chile, moved to France during the Pinochet era, met her Haitian husband, and now calls Port-au-Prince home. She shares Donna’s passion for turning things around for the people of this country, a place where misfortune is recurrent. Paula collects the scraps of T-shirt fabric from the factory and uses them to make handsome handbags, weaving, tying, and stitching them together. Each bag is sold with a tag that, when scanned, shows on the buyer’s computer screen the Haitian child who will receive money to help with school. The message: a substantial part of the price you paid for the bag goes to giving a child a better life. Paula has the locale for the school and some plans for its design. Donna’s on board.

On Wednesday night I gathered together six of the ten or so Haitian graduates of our school who now live in Haiti. Donna kindly agreed, after a grueling day, to meet them, review their portfolios, and see if some of them might be able to work in some future way with the project for Haiti. Donna and the former students, all of them actually now working in art and design, shared the same goal: “Make Haiti better.” Our alumni were thrilled to meet her and to have a little reunion there at the Hotel Karibe, an idyllic spot, verdant and architecturally historic, nestled on the hillside above Port-au-Prince in Pétionville.

On Thursday I flew back to Santo Domingo in my slightly rickety aircraft with a bunch of people from French and other international NGOs. On Thursday evening, Donna and a reduced Donna team flew into La Romana.

The next morning I was there with Dominique Bluhdorn, President of the Altos de Chavón Cultural Center Foundation to show them our school. Donna loved meeting the School of Design students, seeing their work, and actually working with them. She was very impressed by the quality of our students’ work.

In the Fashion classroom Donna pulled off the aforementioned hand-dyed silk scarf and draped it on a student volunteer. In minutes the scarf became a signature Donna Karan wrap dress. The designer sat on the raised platform in front of the students and told her story and the story of her dream for Haiti, and handed out words of encouragement and discouragement—or, rather, reality testing—to those seeking careers in fashion. She was dynamic, engaging, and relentless. Her passion was evident and true, and that afternoon of interchange between our students and this icon of fashion was memorable.

There’s a future, Donna gave the fashion students an assignment, to design a handicraft fashion accessory. She said she’ll be back to review the ideas. We sure hope so.

About the Altos de Chavón School of Art and Design

A component of The Altos de Chavón Cultural Center Foundation, a U.S. 501(c)(3) public charity, the Altos de Chavón School of Art and Design has been graduating students from its two-year associate-degree program, affiliated with New York City’s prestigious Parsons “The New School For Design” since 1983.

Click here for more articles, photos and info about the Altos de Chavón School of Art and Design!