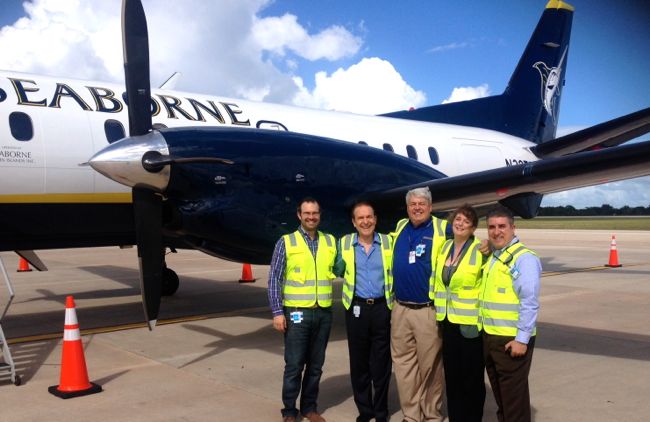 Seaborne Airlines, who are based in St Croix, will now be offering a twice-weekly (Thursdays and Sundays) direct connection between Casa de Campo – La Romana and San Juan, a service which will become daily from March 15th.

At the Casa de Campo – La Romana airport to greet the inaugural flight was President and CEO of the Casa de Campo resort, Claudio Silvestri, as well as Philip Silvestri President and Founder of SILGON, a modern media company based in Casa de Campo. Alongside representatives of Seaborne Airlines, Michael Ritzi and Angelia Hanne as well as Andrés Fernández, Commercial, Airport & Port Manager for Central Romana, Claudio and Philip enjoyed a tour of the plane, a roomy 34-seat Saab.

Book now for flights from just US$99!

To celebrate the start of this direct connection between La Romana and San Juan, Seaborne Airlines are offering fares as low as $99 one way – all taxes included!

Bookings must be made by December 31st for travel by March 6th, 2014. Flights can be reserved at www.SeaborneAirlines.com, Expedia, Travelocity or through your local travel agency.

In addition to this Seaborne flight, other flights arriving to the La Romana – Casa de Campo international airport include: