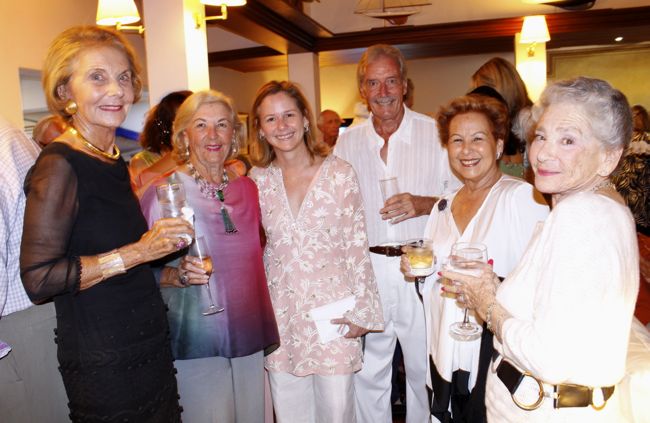 Phyllis Berney, who has been a member of the Casa de Campo community for more than 30 years has dedicated much of her time here to serving others, especially in service of the Hogar del Niño, the Dominican Republic’s most comprehensive day care and education center, based right here in La Romana.

Over the years, Phyllis has shown her support in numerous ways; starting the Adopt A Crib program, which has raised more than US$11million since 1998; as hostess of the monthly Cafe de la Leche celebrations; a driving force behind the Hogar del Niño’s college scholarship program, hosting a evening with author James Bradley in 2011 for this cause; as well as in numerous other ways, including most recently as an advocate of “Hogar” the new store by the Hogar del Niño in Altos de Chavón.

It is for this reason that David and Sheila Gober, themselves great philanthropists, decided to host this dinner party attended by over 100 members of the Casa de Campo community. “Thank you all for being here tonight for such a wonderful lady, Mrs Berney. In recognition of Phyllis, in honor and appreciation for her generosity and commitment to the Hogar del Niño, God bless you, we love you, and thank you,” were the words of David Gober, as he presented Phyllis with a commemorative plaque.

Phyllis, a great inspiration in so many ways, then stood up to greet the many guests, opening with “I know that I must be getting older when my friends start giving me parties…”, proving her humor is just as bright as her generosity.

“In all sincerity working for the Hogar del Nino has been meant so much to me. Xiomara I’m so grateful to you for giving me the opportunity to do it, without Xiomara there would be no Hogar del Niño or Diagnostic Center,” proclaimed Phyllis referring to Xiomara Menendez who founded the cause, and who over the last 2 decades has watched it grow from a dream into a blossoming reality that is changing the lives of so many.

“We’ve come together as a community to support the families of La Romana,” Phyllis continued, “and Xioma Matos is so committed to changing the lives of the children,” said Phyllis of Xiomara’s daughter, president of the Hogar del Niño. Then addressing the entire room, “your support is helping to change the future of healthcare, childcare and education in the Dominican Republic.”

A fabulous evening, in honor of a remarkable lady. Congratulations and thank you to Phyllis.

The following collection of photos were taken at the Casa de Campo Yacht Club at the dinner party hosted by David and Sheila Gober in honor of Phyllis Berney: