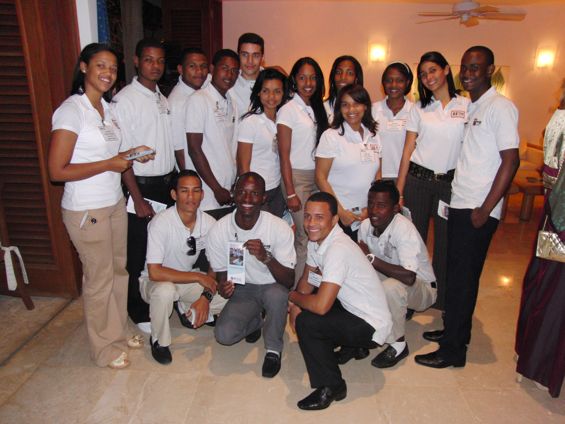 On Thursday the 24th of February, James Bradley, famous author and motivational speaker, spoke to our community of Casa de Campo and inspired us all with his tales of everyday heroes…..

James Bradley, a friend of Phyllis Berney came to Casa de Campo, of course to visit and discover this beautiful paradise we call home, but also to take part in this wonderful evening to raise money for the Hogar del Niño’s Scholarship Scheme.  The evening; a book-signing and speech by James Bradley, held at Phyllis´s gorgeous Casa de Campo villa, began with wine and hors d’œuvres on the terrace, where guests were able to mingle and enjoy a gorgeous view of the sun setting over Pete Dye´s famous Dye Fore golf course, whilst other guests were quick to buy James Bradley´s books and cued to have them signed by the special guest.

Representing the Hogar del Niño was Xiomarita Matos, the president of the organisation, who alongside Phyllis the evening’s hostess, began by introducing the 18 students and current benefactors of the Hogar del Niño’s Scholarship scheme, who in prefect English introduced themselves to the crowd of more than 200 spectators – a great way to start the evening, as these are the students (and future students of course) that the evening was being held to benefit. To fund the education of these hard-working youngsters costs USD$5,000 per year per university student and USD$2,500 per vocational student – a rather costly endeavor!

The students currently on the Hogar del Niño’s Scholarship Scheme

With all seats full and many people crouched on the stairs and others standing wherever there was space, James Bradley began his speech in such a commanding, engaging voice he immediately grabbed your attention and realed you into his tales of intrigue, war and loss. I don’t know what I expected of James Bradley, but I was very pleasantly surprised – at the beginning of the evening I knew nothing (or next to nothing) of America’s participation in World War 2 (I’m English – we learn the ‘European version’) and although I still don’t know much now – I am very intrigued to find out!

After the death of his father, Bradley discovered that he had been awarded a Navy Cross for ‘Extraordinary heroism’ during his time fighting on Iwo Jima – something his father had never told him or even his mother. Intrigued to find out why his father had kept something so big a secret from his entire family and to discover more about his father, Bradley began a hunt for information which led him to writing his first book ‘Flags of our Fathers’ and discovering that his own father had indeed been, an ‘Everyday Hero.’

It was a fantastic speech and James spoke about so much more than I could possibly write down here, if you were there I am sure you will agree, if you missed it, I’m sorry, but you really missed out!

By the end of the evening nearly all books for sale were completely sold out, in total more than 200 were sold – many people, my family included, enjoyed the speech so much they bought all of 3 of James’ books. We originally announced that 20% of the money would be donated to the Hogar del Niño Scholarship fund, but having visited the Hogar del Niño, James Bradley was so impressed by the scheme, that ALL the money raised was donated AND sales were matched by Barbara and Donald Jonas and David Gober, so in the end over $6000 dollars were raised! That’s more than enough to pay for 1 year of education for 2 vocational student or for 1 university student! What a great success! Also building on this great success is supporters such as Tony Cosulich, who has come forward with an additional donation and who is looking for others to give donations to help pay for even more students to be able to continue their education beyond high school!

Would you like to give an extra donation to the Hogar del Niño Scholarship fund?
Contact us now! [email protected]

We must also give very special thanks to Phyllis Berney who put the evening together and  Joyce Berman and Ruth and Jerry Siegel who donated $10,000 each to the scholarship fund.

Here are my photos of you – the everyday heroes who support this event and the Hogar del Niño!