The first Casa de Campo Sugar Shooting Tournament took place in 1988, hosted by J. Pepe Fanjul in celebration of the opening of a new and improved Shooting facility; the Casa de Campo Shooting Center, which was originally located near to the Casa de Campo Polo Fields, and which currently has a Sporting Clays circuit of more than 200 stations, two pigeon rings, and a skeet and trap facility. 15 years later, following the appointment of new Director of Shooting; Shaun Snell, a new shooting facility at Rancho Peligro for European Style Driven Bird Shooting was opened, allowing the tournament to grown from a 4-day event to a 6-day event.

As in previous years, the Casa de Campo Sugar Shooting tournament consists of numerous different shooting tournaments; game shooting every morning at Rancho Peligro, Trap and Colombaire pigeon shooting, two sporting clay competitions, five stands, flush and pool shoot. The participants will also enjoy a variety of evening activities, such as a pre-shoot welcome cocktail party, as well as a prize-giving celebration and dinner. Prizes are awarded to the winners of each category and there are also 2 trophies for the overall winners; the High Overall “GUBELMANN CUP” won by James Gubelmann himself and the High Overall Cup won by Lawrence Berry in last year’s event.

Good luck to all who will be participating in this event! 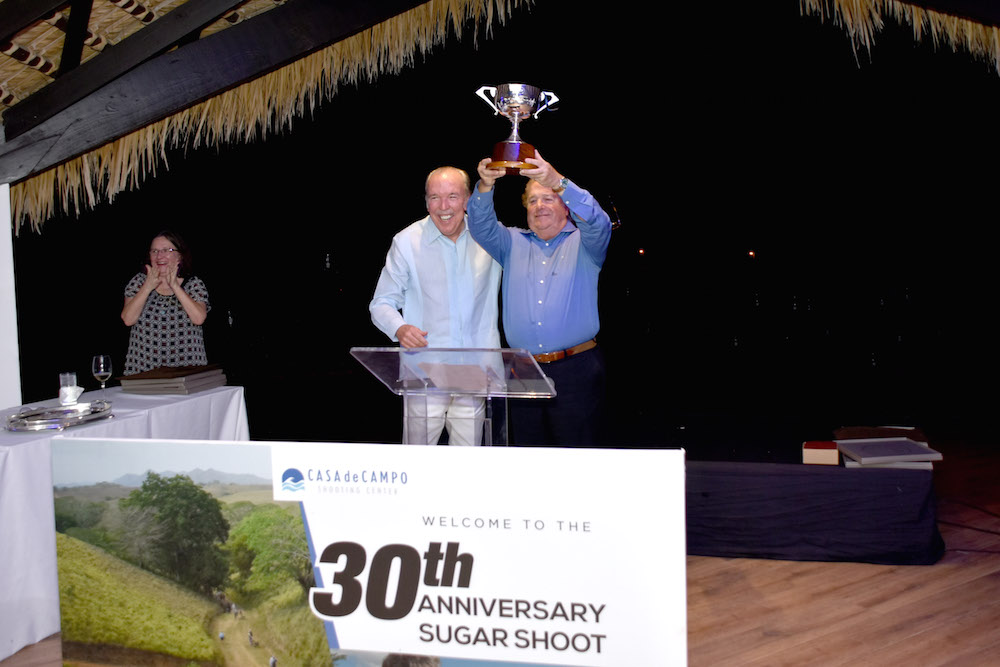 On Saturday evening, April 29th, the rain could not stop the final celebration that commemorated the 30th anniversary of the annual Sugar Shooting Tournament. J.Pepe Fanjul along with his wife Emilia hosted a wonderful dinner and prize-giving celebration at Lagos Restaurant, a quick change of location from their traditional outdoor setting at Casa Grande. The night marked the end of the Sugar Shooting Tournament completed every year at the Casa de Campo Shooting Center and private wilderness reserve, Rancho Peligro. Read last years coverage here.