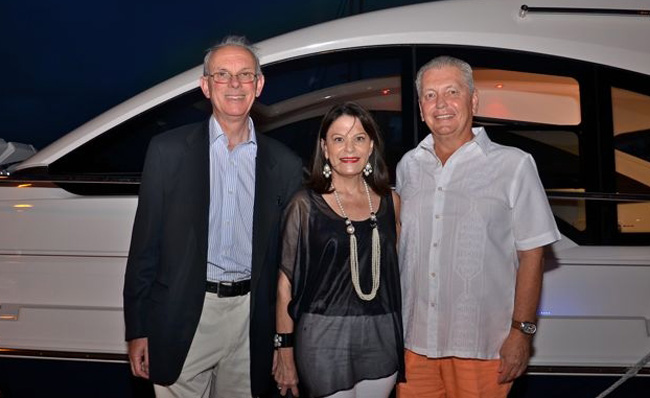 Last Friday June 6th we were honored to welcome to Casa de Campo, Master Blender for Chivas and the actual creator of Chivas Regal 18, Colin Scott.

For those of us who know and love whisky, Colin Scott, whose signature is the “Gold Signature” found on every bottle of Chivas Regal 18 Gold Signature, is a super-hero, an all-star of the whisky-world.

Colin Scott started his visit to Casa de Campo by giving an exclusive interview to our sister publication, CasaLife, the Casa de Campo resort and resident magazine. As an avid whisky drinker and connoisseur, Philip Silvestri, president of CasaLife elected to conduct the interview himself, after all what better way to enjoy a Chivas 18 than with the man who created it!?

From his interview with Philip Silvestri, we re-joined Colin Scott in the Marina Casa de Campo, where in the Plaza Portofino, Fairline Antilles representatives of Fairline Yachts in the Caribbean, hosted a cocktail and whisky tasting in conjunction with Chivas. Fairline, a British luxury motor yacht manufacturer, and Chivas, a luxury Scotch whisky also produced in Great Britain – what pairing could be finer!

Despite a little rain, the Casa de Campo community enjoyed a fantastic evening sampling a variety of different Chivas Regal 18 cocktails, such as the Rob Roy, similar to a Manhattan,but made exclusively with Scotch whisky.

However, with the master himself on hand to answer the question on everyone’s lips “what is the best way to drink Chivas 18?”, we all eagerly awaited for Colin’s verdict so that we may casually reject the cocktails and drink Chivas “the right way”. As it turned out however, “the right way” was remarkably simple – in whichever way we like it best. A typical straightforward Scotsman, our new friend, Colin Scott, answered simply “I can’t complain as long as you’re drinking my whisky!”

We were however a little shocked to discover that Colin Scott’s preferred way to drink Chivas 18 is… with water! (Gasp!) After all doesn’t everyone know that a good Scotch should be enjoyed neat? Without even an ice cube to tint it’s distinct flavors!? Well as it turns out, Scotch, in this case Chivas Regal 18, actually tastes fantastic with water, not only does the addition of a little chilled water take the edge off the alcohol, but in Colin’s own words, it also “brings out the flavors”. And no there is no “golden ratio” for the amount of water you should use, the perfect quantity of water, as per Mr Colin Scott’s instructions, is, yes you guessed it… however you like it best! We’ll be bringing you a beginner’s guide to drinking Scotch (as per Mr Scott’s instructions) very soon.

The following collection of images were taken during the cocktail evening with Colin Scott hosted by Chivas and Fairline in the Marina Casa de Campo: