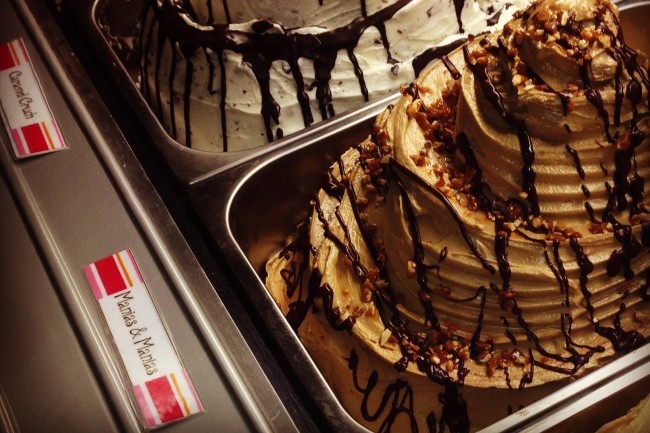 Back in 2012, we told you all about Cinco Gelato and Caffé (be sure to read that article if you haven’t yet!), a lovely gelato shop in La Romana that featured all kinds of delicious flavors to try and enjoy, so, two years down the line, we sat down with Zamira Widmann, who co-owns Cinco with her husband Jorge Widmann, so she could bring us up to speed on the brand’s progress.

Exactly a year after the original Cinco shop opened in La Romana on December 31st, 2011, they opened a second Cinco – this time in San Juan Shopping center in Punta Cana. From there, says Widmann, opening other branches of their brand was easy, considering that to open the Punta Cana shop they had to purchase extra ice cream machinery – enough for various other Cinco’s! So, in due time, a third one opened, in the picturesque Colonial City in Santo Domingo! However, due to issues with the venue, they moved shop, and are now located in Santo Domingo’s La Sirena Multicentro, as well as a fourth location in Bávaro.

When asked about what led to the initial La Romana location’s success – a success so good it allowed them to expand as much as they have – she said it was all about having the relatively small environment of La Romana as the perfect space to experiment with flavors, by just asking the customers what they liked, and catering to what they preferred. The brand, according to her, experienced a growth unlike anything she could’ve possibly hoped for, but yet Cinco continues to grow, expecting to open more shops in the near future.

Nowadays, despite the brand’s expansion, Cinco has maintained their marvelous sense of ingenuity, still experimenting and bringing us new, delicious flavors, aside from the classic winners we’ve all come to love!

Now, I use “we” rather liberally there, but I shouldn’t have to! If you (by some horrid misfortune) haven’t tried Cinco’s delicious gelato flavors then, please, by all means, do yourself a favor and fix that! With all their locations, it’s easier than ever to pop by and try their extremely delicious ice creams, milkshakes, sundaes, and other treats!

Address [La Romana Location]
Restauración #15, Edific. Don Jorge, Local No.1, La Romana
[Around the corner from Dom Ham and close to where Crema used to be.]