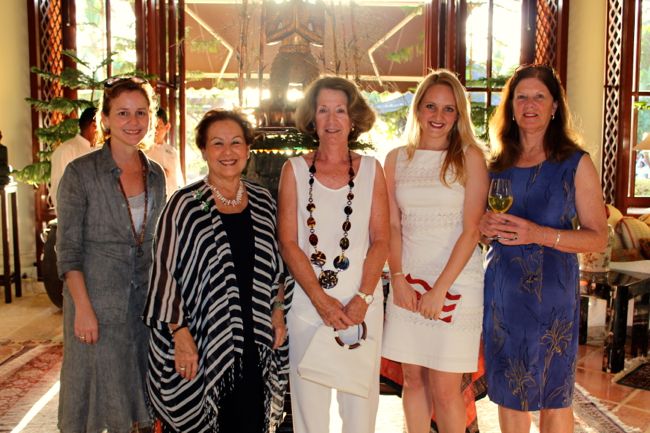 The most magical Café de la Leche of the year was celebrated last Friday the 13th of December. With the queen of Christmas decorations and festive celebrations, Xiomara Menéndez, founder of the Hogar del Niño as our hostess, the Christmas Café de la Leche filled our hearts with festive cheer!

The magnificent Menéndez villa, perfectly positioned in the centre of Bahía Minitas, had, as we have come to expect, been magically transformed into a Christmas paradise, with numerous Christmas trees and decorations flowing through from the entrance to the garden.

Greeting us as we arrived was the famous “miniature Christmas village”, which this year had become an alpine town, with all the tiny homes, trees and other mini-buildings stacked vertically as if at the top of a mountain.

Also forming quiet a mountain at the entrance was the treasure trove of candies generously donated by all the guests.

And low and behold, as we made our merry way out into the garden to enjoy the sunset, the choir of the Hogar del Niño, looking adorable in santa hats serenaded us as the sun disappeared into the ocean. This magical Christmas concert served to promote a music CD the children had created and which is already on sale to raise money for the Hogar del Niño’s English program.

At this special time of year, at this very special event, it was truly a great pleasure to not only see the children for whom this charity works so hard to educate and look after, but also to see firsthand their talent and potential.

Showcasing a great range of talent, the choir performed beautifully as a group, but also including some outstanding solo performances. The Christmas concert included the following songs; “Burito de Belén”, “Silent Night”, “Gloria en alto”, “I believe I can fly”, “El canto de un niño”, “Ave María”, “We are the world” and ended with “Feliz Navidad”.

Beaming with pride as the leader of the choir was Diane Tobio, a volunteer at the Hogar del Niño from the US.

“The group started because I have always found the natural talent in the school to be incredible and I also wanted to show that learning English is easy and can be fun through music. The group was designed with the thought that we could make a CD to profit the English program at the school. It was perfect and surpassed my expectations.” Diane told Casa de Campo Living.

The enchanting evening ended with a deliciously festive feast, accompanied by home-made eggnog, as well as white and red sangria.

As well as more than 100 Casa de Campo ladies, also joining us for the celebration were a group of very special guests from Japan. Members of JICA, the Japan International Cooperation Agency, who were in Casa de Campo visiting the Hogar del Niño, which they have been supporting. As well as numerous volunteers from the US and all over the world, the Hogar del Niño is now also blessed to have two Japanese volunteers from JICA.

And so with our bellies full of Christmas treats and our hearts filled with festive love, we bid a fond farewell to the home of Xiomara Menéndez and made our merry way to Altos de Chavón to the spectacular opening of the holiday season – click here for the photos!

The following collection of photos were taken during the Christmas Café de la Leche on Friday December 13th 2013 at the Casa de Campo villa of Xiomara Menéndez:

The following collection of photos were taken by Bryan de la Cruz: