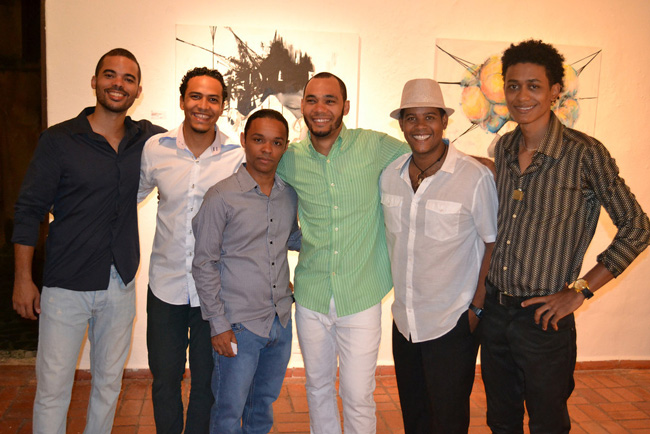 Never have I been more impressed with an exhibit at The Gallery in Altos de Chavón than I was at the opening of the “Hall of Winners” exhibit on Thursday June 12th.

This collective works by 6 graduates of the Altos de Chavón School of Design is outstanding, it is easy to see why these artists are the winners of so many different prizes.

Although aside from the obvious abundance of talent, what I was most impressed by was these young artists’ enthusiasm and passion. Each and every one of them spoke with such excitement about their work and their futures that you couldn’t help but feel excited too. And excited they should be, because for these young men to have created such sophisticated pieces so early in their careers (some literally having only just graduated), there can be no doubt that success lies before them.

Starting with the work of Obed González, inspired from his surroundings – Casa de Campo – and the luxury lifestyle those of us who live here enjoy, we see surprising maturity. Obed descibes his style as “spontaneous and fun”, explaining that he is “playing with a juxtaposition of images in a realistic way with lots of expressive color and showcasing the beauty of Casa de Campo, as well as its lifestyle.”

On the other hand is Gabriel Castillo who paints reality, as he sees it, an expression of his opinions and frustrations at politics, corruption and the many other problems facing the Dominican Republic. His work is both beautiful and intriguing. “I aim to portray more than a message, but rather to show something in a different light, change someone’s way of looking at things.” An example of this is his huge painting of 2 policemen on a motorbike, which upon closer inspection is actually an ape and a man on a motorbike, an alternative way of viewing the justice system in this country.

In stark contrast was Modesto Santiago, whose beautiful representations of Dominican flowers are so realistic, you felt as if you should be able to smell them. Equally beautiful was a fascinating painting of a beehive with bees spreading out around the piece, an impactful piece which, according to Modesto, portrays that ‘when we work together as a team and bring positive ideas together, we can achieve anything we can set our minds to.’

Cuban, Alejandro Perez, explained with enthusiasm how in each of his works he talks about things in his life that have effected him and how nothing is quiet as it seems, how everyone and everything is hiding something, how the pure truth is always buried beneath what we want people to see. A way in which he portrays this is with the incorporation of bills and other paper communications into his artwork.

Rafael Almánzar, another graduate of the Altos de Chavón School of Design, left what he called “an unforgettable and priceless experience” at the School with the ability to create hauntingly beautiful grayscale portraiture, a self-described blend of “abstract and figurative styles”. In his pieces we see incredibly striking black-and-white images of children mixed into what looks like some sort of living, breathing, collage, with parts of every child’s image distorted by including dark imagery of black matter, gas masks, and the like. Far from conventional, yes, but his gorgeously dark artwork is a must-see for art connoisseurs and amateurs alike.

Also among the celebrated artists was Wali Vidal, who calls his particular style “Caribbean Pop Art”, a tag that seems incredibly fitting, with paintings that remind viewers of Andy Warhol and his contemporaries, had they ever decided to pop by a colmado (a common Dominican deli/bar seen in most neighborhoods around the country) or watch some Dominican TV and paint what they saw. Inspired by Dominican folklore and culture, he reflects his inspirations beautifully within artful color schemes in his fantastic paintings.

All of this splendid art is being displayed in the Altos de Chavón Gallery, as part of the “Hall of Winners” exhibit, these artists (who are most definitely “winners”) being chosen by judges from the Dominican National Biennale of Visual Arts, and whose work have been displayed in the Museum of Modern Art in Santo Domingo, truly an honor for these young artists, but one they clearly deserve.

The following collection of images were taken during the opening of the Hall of Winners exhibit at The Gallery in Altos de Chavón on Thursday June 12th: