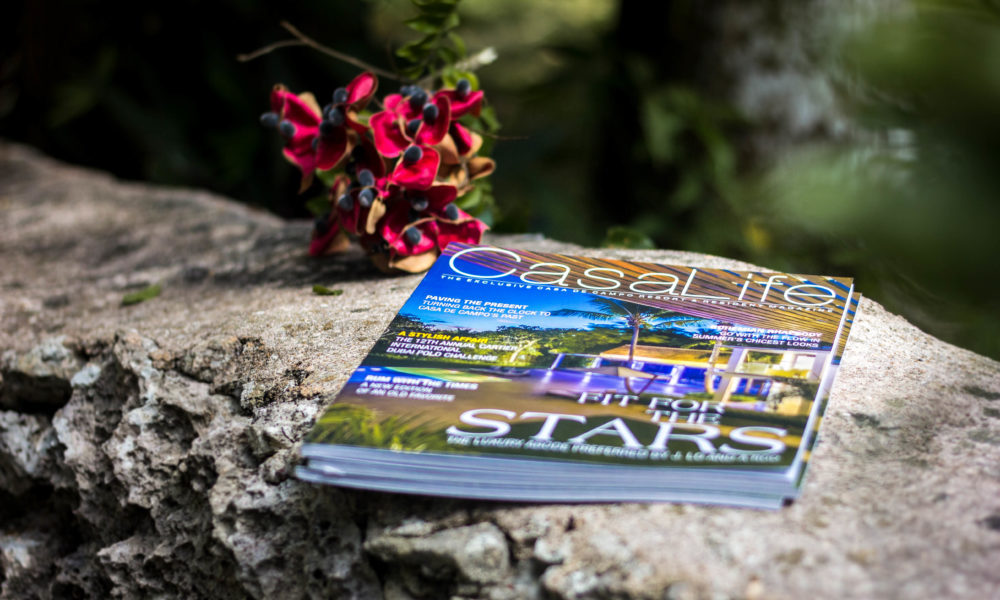 We couldn’t be more excited that CasaLife is HERE!!! Exploring the historical past of visionary Charles Bluhdorn to following the lifestyles of celebrities and environmental activists, CasaLife‘s summer edition transports you where you’ve never been. CasaLife and Casa de Campo Living magazines are being distributed to your villa as we speak, so take a moment to live vicariously!

Some of the most beautiful, jaw-dropping vacation homes around can be found in Casa de Campo. They’re so exquisite, in fact, they’ve been the luxurious escape for celebrities like Beyoncé and Jay-Z, Vin Diesel, Marc Anthony, and Pitbull just to name a few. In Jennifer Lopez’s first official trip to the Dominican Republic, Casa de Campo’s Casa Palma housed the A-list star along with her beau, Alex Rodriguez and both their sets of children. From coverage of her Altos de Chavón spring-break concert to an insider’s look at her private stay, if you’re curious how the stars live, CasaLife gives you the tour…

Our sister magazine’s stellar series, “Designing Paradise” continues with Instant Yesterday with a focus on Charles Bluhdorn, described as the man who “routinely made the impossible happen”. Highlighting the blossoming of Altos de Chavón and Casa de Campo’s unlike-anywhere-else-on-earth qualities, we have to admit, this article is the best yet.

Trekking the mountains of the Dominican Republic, distinguished photographer Miriam Calzada travels distances we’ve never imagined. In her environmental journey, she documents the unfolding of nature and mankind’s hand in it. Of her photographs many have said, “She is our eyes” as she showcases the reality of water scarcity and deforestation throughout the country. CasaLife sat down with Miriam following the release of her latest book, “Pacto con las aguas” for a deeper look into the unknown and her message to us all.

The summer magazine also details the coverage of one of Casa’s most loved annual events, the Sugar Golf Tournament. The tournament which benefits the Fundación MIR and Hogar del Niño charities not only encompasses days on the green, but cocktails in the Marina with Benetti Yachts and a dinner-dance party at La Romana Country Club. The several-page spread also showcases what’s in style this year with clothing and accessories at the MIR Bazaar. See how the Casa community enjoyed each of the events!

A special edition of the Hogar del Niño Weekend fell this year as the La Romana charity celebrated their 20th year of the annual event! From more sporting activities to festive nights, the Hogar del Niño drew quite the spirited crowd. Supporting the local charity is as much a monthly event as yearly one, and continues next week’s with Café de la Leche!