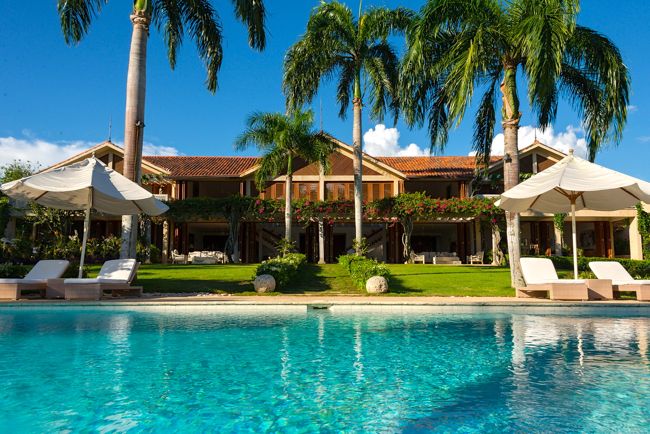 Casa B, is the breath-taking Casa de Campo villa of Phyllis Berney. A plantation-style home overlooking hole #3 of the La Romana Country Club golf course and the Caribbean sea.

Today, Casa B, undoubtedly Casa de Campo’s most charming villa, is for sale for US$4.5million.

In the exclusive Barranca Este neighborhood of Casa de Campo, Casa B is perched overlooking much of the resort, boasting the most incredible 180 degree ocean view. A view which can be enjoyed from every room in the house, from the entrance to the bedrooms, to the living areas, wherever you go in Casa B, the view follows you.

Casa B was designed by Carlos Lebinsky, famous for his work in Argentina and Uruguay, while famous Argentinian artist Leopoldo Maler was in charge of the construction.

Having previously owned a traditional-style wooden Casa de Campo villa, Casa B was built  in concrete, yet cleverly designed to have the look of a wooden home. With white-washed walls, coraline floors and huge wooden folding doors, windows and shutters, Casa B is the epitome of the perfect tropical home, so at one with nature that the colorful flowers of the bougainvillea lining the outside terrace are blown indoors on the breeze.

From this perfect Casa de Campo home in paradise, the Minitas beach, the Marina Casa de Campo and Altos de Chavón are all only a 5 minute drive away, while the La Romana Country Club golf course is literally at your doorstep for early morning or late-afternoon walks.

This villa is a gem in the glittering jewel that is the Casa de Campo resort. Photos do not do Casa B justice, come take a look and fall in love for yourself.

The following article is the unabridged version of a piece published about Casa B in our sister publication, CasaLife magazine, in December 2013:

Casa B, a domestic masterpiece

Yesterday all our troubles seemed so far away. “It just fit us so well.”, says Phyllis Berney when describing the “Tango Dancers” by Leopoldo Maler, her favorite piece in the vast artworks collection found in her Barranca Este home.

You see, when Phyllis and her husband, Joe, bought this magnificent 8ft piece, more than 20 years ago, their home in Bahía Minitas had just burnt to the ground and Joe was in the final stages of his battle with lung cancer. It was this series of events that led the couple to the home of Leopoldo Maler, the purchase of the Tango Dancers etched with these haunting lyrics by the Beatles, and the birth of Casa B, one of the first and most beautiful homes in the Barranca Este neighborhood.

Having all arrived in Casa de Campo in the early 1980’s, Phyllis and Joe became acquainted with Leopoldo through the Altos de Chavón School of Design, where he was the first dean of studies in 1983. A well known conceptual artist himself, perhaps most famous for “Hommage”, a flaming 1974 modified typewriter, Leopoldo, rather than settle in Casa de Campo, decided to build his own home on the other side of the Chavón river in Boca Chavón. “We thought if he can build that house across the river, he can build our house”, Phyllis told CasaLife in a recent interview.

Not an architect himself, Leopoldo enlisted the help of his good friend and architect Carlos ‘Dudy’ Lebinsky, also from Argentina and an eccentric character who has the world’s most complete collection of toilets, and is also a collector of tennis paraphernalia, as well as vintage cars. As the architect Carlos ‘Dudy’ Lebinsky worked on the plans, while Leopoldo managed the construction.

Phyllis and Joe were joined by Dudy and Leopoldo on their first visit to the land, “we arrived with 5 workers who cut through the wilderness with machetes”, says Leopoldo who also joined us for the interview, “Joe was so excited that he was running around. His main decision was to have this land.” Leopoldo and Dudy completed the plans within 24 hours, “I explained my vision to Dudy, and because I don’t draw, he did it. For me it was a great experience and a great passion this house.”

Just 14 months later Casa B was completed. A truly contemporary-style home, that takes it architectural cues from the spectacular nature that surrounds it, “we wanted to see out onto the beautiful Dominican Republic,” explains Phyllis. The 14,000 square foot villa welcomes guests into a palatial open-plan living space with a magnificent view over Casa de Campo and out to the Caribbean sea, the same view enjoyed from each of the 7 bedrooms, including the guest house.

Yet while this property is both modern and minimalistic, it is also very wooden, so much so that from the outside it actually looks like a wooden house, a nod to the Berney’s first Casa de Campo home, a traditional wooden design. “Once you’ve lived in a wooden house you hate concrete, so we said lets do the structure of concrete, but let’s put as much wood as possible,” explains Leopoldo. This nature-orientated approach to the design, brings the outside indoors, as the flowers of the bougainvillea that frame the entire structure are blown in on the breeze.

Central to the character of the villa is Phyllis’ passion for art. “Art is really important to me, I was a member of the Wisconsin Arts Board and later was appointed by President Ronald Reagan to serve on the National Council for Arts.” Every room is perfectly balanced with paintings and sculptures by numerous international artists.

The vast central living space, is overlooked by the “Riding Maya” by Leopoldo Maler, part of a series based on the The Nude Maja by Francisco Goya, “I’ve done a lot of work based on the Maya. She’s losing parts of her body as the horse rides,” explained the artist. Also in this area is the Tango Dancers, part of Maler’s series on bilingualism, inspired by his experience in Miami. “I was very impressed by the bilingual culture, so I started to do a lot of work with poetry, one word in English, one word in Spanish, one word in English, one word in Spanish, here one line is a song by the Beatles, the other a Tango by Gardel, the phrases alternate. ‘El día que me quieras’ was the first tango ever sang.”

Two other masterpieces by Maler take pride of place in Casa B; the Dominican Fishing Boats and Wood Heads. Both feature old, discarded wood. “Wood is like a sponge, it has a memory, I do many pieces using recycled very old wood, because it brings a story into the piece.”

Remarkably, many of the artworks featured throughout the rest of this plantation-style abode were purchased from artists-in-residence at the Altos de Chavón School of Design; Ann Parker, Patricia Tobaco Forrester and Mark Lineweaver. While there are also beloved sculptures by Chaim and Mimi Gross and Paul Granlund, as well as photography by Mario Algaze.

The last piece of artwork is a creation by Phyllis herself, her orchid garden which she has been cultivating for more than 10 years. With more than 200 plants, this beautiful labor of love consists entirely of different varieties of native Dominican orchids; the Catleya, the Phalaenopsis and the Vanda Cultvar.

Nestled in such lush tropical vegetation, brimming with fine culture, art and architecture, Casa B is a Casa de Campo masterpiece, a home where in Phyllis’ own words “life is as it should be.”