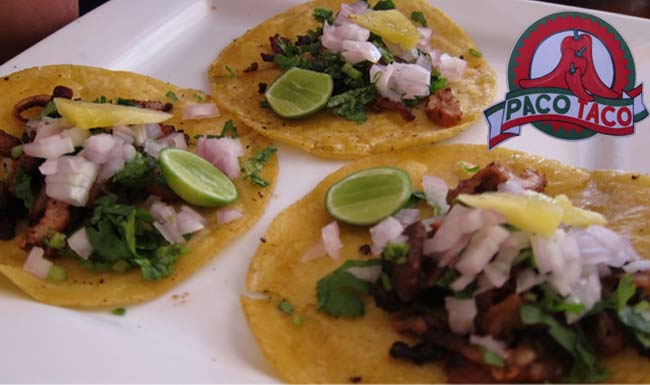 On a recent adventure outside of Casa de Campo, Philip and I decided to drive to San Pedro de Macoris (west of La Romana) in search of a Mexican restaurant we had heard was good – the problem was we didn’t know where it was or what it was called. But the desire for good Mexican food drove us on and in the end we found “Paco Taco” – and thankfully we were not disappointed, the food at this small Mexican restaurant was definitely worth all the effort and the long drive!

And so now, with this delicious experience behind us (and inevitably in our future), here we share with your the taste of “Paco Taco”, an authentic Mexican restaurant with really great Mexican Food! Ay caramba!

“Paco Taco” is in the seaside town of San Pedro de Macoris, located about a 45 minute drive from Casa de Campo (we timed it) – admittedly a little bit out of the way, however if you are heading to or returning from Santo Domingo, Paco Taco could be a good option for a pit-stop. Although we don’t know San Pedro very well, there does not appear to be much to see or do there, however if you go we recommend you take a drive by the cathedral (you’ll be stunned by how white and beautiful it is), as well as along the malecon (the road along the ocean), which is very close to the restaurant.

[Full driving instructions for getting to Paco Taco are below.]

As far as “theming” goes, Paco Taco is Mexican! From the mini-cactus centre pieces on each table to the Mexican wall portraits and flags to the mariachi cut-out figures and the “Viva Mexico” sign behind the bar, Paco Taco is Mexican wherever you look – maybe not exactly how restaurants in Mexico look, but certainly how you imagine they would look!

The restaurant itself is small, with 2 large seating areas outside and less than 10 tables inside – creating a cosy chilled out atmosphere, which apparently gets quiet crowded and lively in the evenings.

The service we experienced was excellent, our server was impressively attentive and surprisingly efficient and our food was ready very quickly.

Excellent, delicious, wonderful! We loved the food so much, we ended up trying a few more dishes than we intended….but all in the name of research! So here we bring you an overview of the dishes we tried:

Nachos – the only way to start a Mexican meal! From the first bite we knew we had found a really truly honestly genuine Mexican restaurant! The nacho chips themselves were home-made, crispy and topped with delicious fresh ingredients; the most incredible and smooth guacamole, cheese, tomatoes, cilantro, shredded chicken and sour cream. We added a side of refried beans, because I love them and quenched our thirst with a rather funky looking frozen lemonade and a “Michelada” a traditional beer cocktail, which despite being a bit odd was pretty good.

This is my all-time favorite Mexican food and they were great, crispy, flavorful and delicious. Flautas, for those of you unfamiliar with this treat are wrapped and fried corn tortillas stuffed with pulled pork (or chicken, beef, lamb) and then topped with white cheese, guacamole, tomatoes, cilantro and sour cream, served on a bed of lettuce.

Another fantastic dish – authentically cooked and prepared and loved by us! Chimichanga is a flour tortilla stuffed with different types of meat (chicken, beef, pork, lamb), which is then fried and topped with sour cream and cheese and served with guacamole and tomato salad. A spice lover, Philip choose to order a side of Jalepeño’s (RD$60) to accompany this dish, which I was too afraid to try, but he certainly seemed to enjoy!

At this point we were full and were done trying foods……but then we got talking to the owners (Francisco Villareal and his wife Maria Alvarez), who insisted we try just a few more dishes – to really get the authentic taste of Mexico! And so with the help of a truly delicious Margarita (RD$170), we continued our culinary adventure…..

The cheapest and the BEST thing we ate! Maria described this dish as being the most authentically Mexican item they had on the menu (she admitted some of the others had been altered slightly to suit Dominican tastes) and the most popular – and now we know why! The tortillas themselves are more “suave” than those used for some other menu items (and 100% authentic), topped with suckling pig meat, onions, cilantro, a squeeze of lemon and a slice of pineapple they were delicious and fresh tasting. A MUST TRY!

Very similar to the flautas, these corn tortillas stuffed with suckling pig meat, topped with red onions and served with refried beans is my idea of heaven! LOVED them!

Click on the image below to view the full menu:

And then that really was all we could eat – so we got talking to the owners again and learnt all about Paco Taco’s nearly 20 year history, it’s a great story, so we just had to share it with you:

The (brief) history of Paco Taco

Owner and president of Paco Taco, Francisco Villareal was born in Mexico City and moved to the Dominican Republic more than 2 decades ago to work as a chef in an all-inclusive resort near to San Pedro de Macoris, where he decided to supplement his income with a small catering business ran from his home. At this point he became acquainted with one of the supervisors at CEMEX (a large cement factory), who loved his Mexican food so much that he invested in him and helped him give up his job at the hotel and buy a “food van” – and in 1998 “Paco Taco” was born! From then, the business grew and Francisco was able to open up an actual restaurant, but when business got slow (when the Mexican population declined), he moved the restaurant to Santo Domingo, but then 6 years ago returned to San Pedro, where the restaurant has once again become very popular!

“It’s delicious. We love it.” – Paola Treviño de Gonzalez (who is a real Mexican, so she would know!)

How to get to Paco Taco!
The following instructions will guide you from Casa de Campo in La Romana to Paco Taco in San Pedro de Macoris.

Step #1: Getting to San Pedro

When you exit the Casa de Campo resort turn left and drive straight through La Romana town – stay on the main road until you come to a big crossroads and then turn left and you’ll be on the Autovia del Este – this is the route to Santo Domingo. Stay on the Autovia del Este, you’ll cross over 2 rivers (Río Cumaysa and then Río Soco) and pass by the “Cuevas de las Maravillas” and when you reach the main T-junction (where you would normally turn right to go to Santo Domingo) – go straight on (the signs will say San Pedro de Macoris). This main road will lead you straight into San Pedro.

Step #2: Getting to Paco Taco

Once you’re heading into San Pedro keep going straight (the road you are on should be called “Avenida Luis Amiama Tio” – but be warned there are not many road signs), at one point there is a temptation to go right, don’t – keep going straight. At some point this road becomes the “Avenida 27 de Febrero” and you will pass by Jumbo supermarket on your left. Keep going along this road until it ends at the park. At the park turn left and go straight until you pass the Cathedral on your left (you can’t miss it) and then at the end of the road loop around the cathedral and head back in the same direction and on the second corner turn left and you’ll be on “Calle Sanchez” – keep going and you’ll find Paco Taco on your left.

Please visit the google maps website – for a larger, interactive version of this map: http://maps.google.es/

Route 2: This route makes more sense when you look at the map – but this has NOT been tested by us!

Once you’re heading into San Pedro keep going straight (the road you are on should be called “Avenida Luis Amiama Tio” – but be warned there are not many road signs), at one point there is a temptation to go right, don’t – keep going straight. At some point this road becomes the “Avenida 27 de Febrero” and you will pass by Jumbo supermarket on your left. 4 corners after the Jumbo supermarket, turn left onto the Avenida Presidente Henriquez, then take the 8th left onto Calle Sanchez and drive down the road until you see Paco Taco on your left.

Please visit the google maps website – for a larger, interactive version of this map: http://maps.google.es/