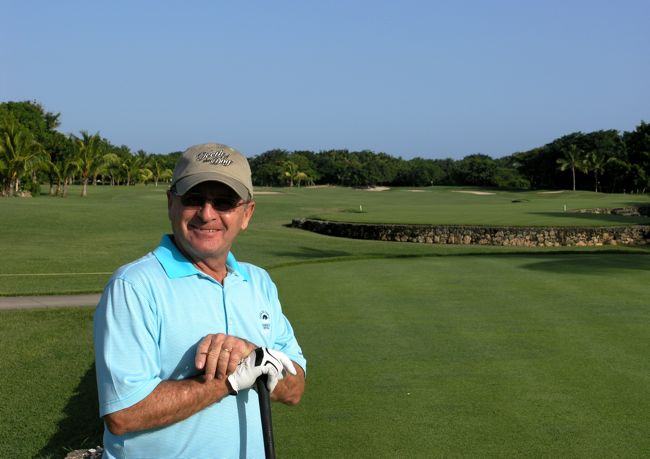 Following the miraculous reparation and re-opening of the Teeth of the Dog golf course following the passing of Tropical Storm Isaac which closed the Caribbean’s #1 golf course due to damage to tee boxes, greens and bunkers – we got together with Gilles Gagnon, the driving force behind the Casa de Campo golf department, who as Director of Golf has been working at Casa de Campo for the last 31 years.

So here we bring you an interview with Gilles so that you may get to know the man behind Casa de Campo’s proud and long golfing history.

@cdcliving: What brought you to Casa de Campo?

I had been the Golf Director and hockey coach at Colgate University for 5 years and needed a new challenge. We hosted the NCAA Golf Championship in 1977 and I became more interested in golf. I was also tired of cold weather and when I saw the Teeth of the Dog and the annual average temperature of the Dominican republic I was sold.

@cdcliving: What exactly does your role as Director of Golf involve?

Gilles: I am in charge of the entire golf operation, the shops, tournaments, golf courses, etc. I also spend a lot of my time promoting the resort, but specifically our golf events and tournaments. Anything and everything with golf I get involved with and watch over all the details.

@cdcliving: In your role as Director of Golf, how do you ensure that golfers in Casa de Campo enjoy an exceptional golfing experience?

Gilles: If the golf courses are in good shape and they can play at a good pace, golfers are usually happy. Having said that, we try very hard to watch over them as individuals. Little details like clean range balls, a towel on the cart, water in the coolers, teeing off on time does not just happen – we have to plan. Every week we review the previous week to see how it went and plan for the next depending on what we have on schedule.

@cdcliving: Over your years working for the Casa de Campo Golf department what achievements are you most proud of?

Gilles: That I have created many events and tournaments, and that the repeat business is as high as anywhere in golf. I have golfers that have played in the “Casa de Campo Open” 30 years in a row. We also have opened three more golf courses since I have been there. If you talk to a golfer about Casa de Campo, many times they will say: do you know Gilles Gagnon the Golf Director? That is pretty cool to me that my name is part of this great place.

@cdcliving: What is it that keeps golfers retuning to Casa de Campo year after year?

Gilles: Our three resort courses are amazing and each one provides the golfers with a different golf experience. Also because of our tournament schedule, people come back to see the friends they have made over the years. It is like a family reunion.

@cdcliving: Tell us a little more about the many Casa de Campo golf tournaments? How did they come about?

Gilles: My first year in Casa de Campo was pretty quiet so I decided that I wanted to give a reason for people to come – so I started with the “Casa de Campo Open” golf tournament, next came the Seniors Invitational. After that my goal was to do one event a month, the rest is history. One of the best events in the Caribbean is the Caribbean Classic which we started here for the Caribbean Golf Association. The idea was to have it here for the first three years and move it around after that to the other 9 member countries – but it seems to find its way back here on a regular basis!

@cdcliving: The Teeth of the Dog has held its own, with serious staying power on a very long list – what characteristics have helped not only put it there, but keep it there as so many new golf courses are built every year?

First, it is a great golf course. No question about it. The 7 holes on the ocean are breathtaking and others are also great holes, but Pete Dye is the main reason. Every time he is here he walks the courses and tells Nunez Malena the Golf Superintendent and me what he wants us to do or the changes that need to be done to make sure it is up to par.

Gilles: Teeth of the Dog, because I have played it thousands of times and can’t wait to play it again. It is like being married to the same person and you cannot wait to get home at night to be with her or him. This does not happen very often, it is pretty special.

Gilles: Me of course! Just kidding. The entire Casa de Campo staff. We are all in it together – golf staff, hotel staff, housekeeping, wait staff, everyone. Probably 50% of my staff have been with me since the beginning and they pretty much know what I want and what I am thinking about. I can also say that the workers are better now. For example, I have two young ladies that work with me in the office, Carolina and Liondy. They are bright, dedicated and that makes all the difference. I trus them, so it gives me a chance to plan for more eventos. My two assistants Dave and Raul are also very good at running events and that is key to our success.

@cdcliving: As one of the world’s top golf destinations – Casa de Campo has welcomed many famous faces over the years – did any join you for a round of golf on the Teeth of the Dog?

Gilles: It is interesting you ask this question. Nine years or so ago within a one month span, I played golf with President Carter, President Clinton, President Bush and the Prime Miniter of Canada Jean Chretien. While playing with the Prime Minister Chretien, I asked him if he was tired of all the official dinners he had to attend to even while he was on vacation. He aswered yes and I proceeded to ask him if he and his wife wanted to come to our house and have an informal barbecue ? He said that would be great. We ended up having a nice dinner with Mr. Chretien and his wife, Pierre my brother, his wife Carole, Merrilee and I. We had a great time and we all drank too much. We still get a Christmas card from them every year. If I took the time, I could write a book about the famous people I meet and played golf with in the last 30 years.

@cdcliving: What does the future hold for Gilles Gagnon and the Casa de Campo golf department?

Gilles: I have three grand children and one on the way in a few weeks so taking some more time in the summer to be with them is important. Casa de Campo IS my life! Both Merrilee and I love it here. I also want the golf operation to continue to improve, I want to pass along what I have learned over the years to my assistants so that when it is time they can take over, but not yet. I can not see myself retired, I love it when we are busy, I love it when the hotel is full, I love it when Merrilee and I have to attend three to four banquets a week and I love to get emails and phone calls from people after they have left to tell me how much they love Casa de Campo. I think 64 years old is the new 54 so I am looking forward to another 10 good years. When people retire where do they want to go? The dream life in the Caribbean… heck I am already here.

Gilles Gagnon with the family on the Teeth of the Dog golf course!

THANK YOU Gilles for such a wonderful interview!