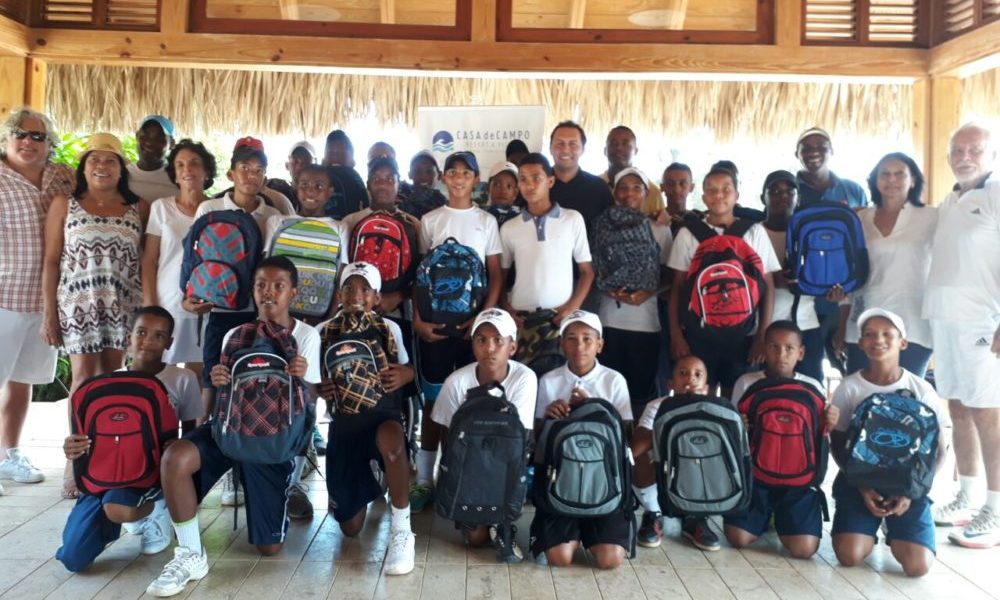 This past Saturday was a great day for Casa de Campo’s ball boys from La Terraza Tennis Center and the Country Club. At La Terraza Tennis Center, the Fundación de boleros de La Romana gifted boys with book bags and school supplies for the upcoming school year. An afternoon celebration sponsored by Mejia Arcala y Milex followed the weekend’s children’s tennis clinics and included snacks, soft drinks, and some desserts for the boys as they chatted amongst themselves and eagerly awaited some very cool back-to-school book bags.

The Fundación de boleros looks after ball boys ages eight years old to college age, focusing on their academics and instilling the importance of education. President Maria Victoria de Mastrolilli says the foundation has been running approximately 38 years and dates back to when her husband, Vincenzo Mastrolilli worked with philanthropist and fashion designer Oscar de la Renta to bring support to the boys. It was in 1978 that Mastrolilli began the prestigious Casa de Campo International Tennis Cup Tournament that will hold its 40th anniversary in just 10 days time.

Maria Victoria noted, “It’s a beautiful job that we have,” as she explained how proud she is of the boys and that many of them go on to become professionals in various fields, including medicine, law, and engineering. As she passed out the bags to some very appreciative boys, one could see the amount of excitement on their faces as they unzipped them and pulled out colored pencils, notebooks, and more. One lucky boy, David Zorrilla was even gifted a tennis racquet! He was extremely honored and excited to receive such a special award. The event had the support of longtime villa owner Antonio Esteban and his wife Dolly, who serves as the Fundación de boleros de La Romana’s vice-president. Antonio has played in the International Tennis Tournament every single year since its beginning, even when he had an elbow injury a few years back and played with the other arm!

Join the list of committed individuals and charities who are making a difference in the lives of Casa de Campo’s ball boys. Plus, today marks a very important day for tennis as tennis pro Nicolás Almagro will hold a clinic for kids this afternoon. There’s also still time to sign-up for the 40th International Tennis Tournament which is open to locals and foreign players over the age of 21. Registration is open until August 28th. Come out and play!