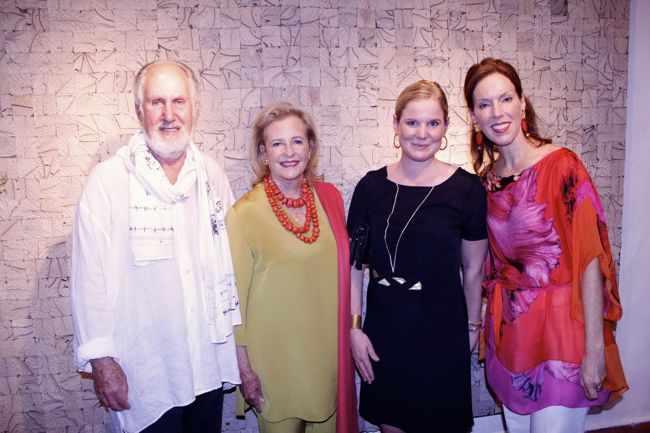 Thursday, February 27, marked an event that in many ways was as revolutionary as the Independence Day celebration it shared. The Gallery at Altos de Chavón was chock-a-block with work by students, graduates, and faculty of The Altos de Chavón School of Design, and by Chavón Artists in Residence.

The effect was stunning. Rik Laird, Patti Rambasek, Norma Reubel, and the invincible Wintersteins, Renata and Peter, turned out a crowd that surpassed those of the three previous years’ events. Almost two hundred people attended, and all were impressed with the high quality of the artwork and the event’s organization.

The hors d’oeuvres and bargenerously underwritten by Casa de Campo  the music, but most of all the art won paeans from the public. Art for every pocketbook dazzled the crowd, from $150 linoleum prints to Frank Lara’s splendid collage made of silicone-treated natural fibers and leaves, which sold for $2,200. The show will be up until the end of March, and the work is still available for purchase.

All the profits of Art Chavón go to the Altos de Chavón School of Design Scholarship Fund. Art Chavón was linked with the groundbreaking for a handsome structure that will house five new artist-in-residence studios; designed by the architect and Chavón graduate Adolfo Despradel, it is being built here in Chavón as part of the Davidoff Art Initiative. Contracts were signed that will bring top international artists to Chavón for a stay of three months every year in this innovative program.

Davidoff flew in 20 international art critics and curators to visit the Museum of Modern Art in Santo Domingo, participate in a symposium on the future of Caribbean art, and see the work of several Dominican artists selected as artists in residence in other locations around the world as part of the Davidoff Art Initiative. The curators and journalists came out to see Art Chavón 2014 and were bowled over by the School of Design students’ work. Davidoff’s CEO, Hans-Kristian Hoejsgaard, purchased a large canvas by a current student; his team bought art, too, from a small embroidered fish to several of the ubiquitous Frank Lara collages.

The magic of the Art Chavón 2014 evening was the convivial mix of the Casa de Campo community, the Davidoff visitors, the 15 student aides, the villa owners, and the Central Romana administrators. The charming babel of languages and the animated conversations about art bubbled among friends old and new and filled the air of the soft, cool night at The Altos de Chavón Gallery.

The following collection of photos were taken at The Gallery in Altos de Chavón during the gala opening of Art Chavón 2014, photos and coverage of the start of the Davidoff Art Initiative are coming soon: