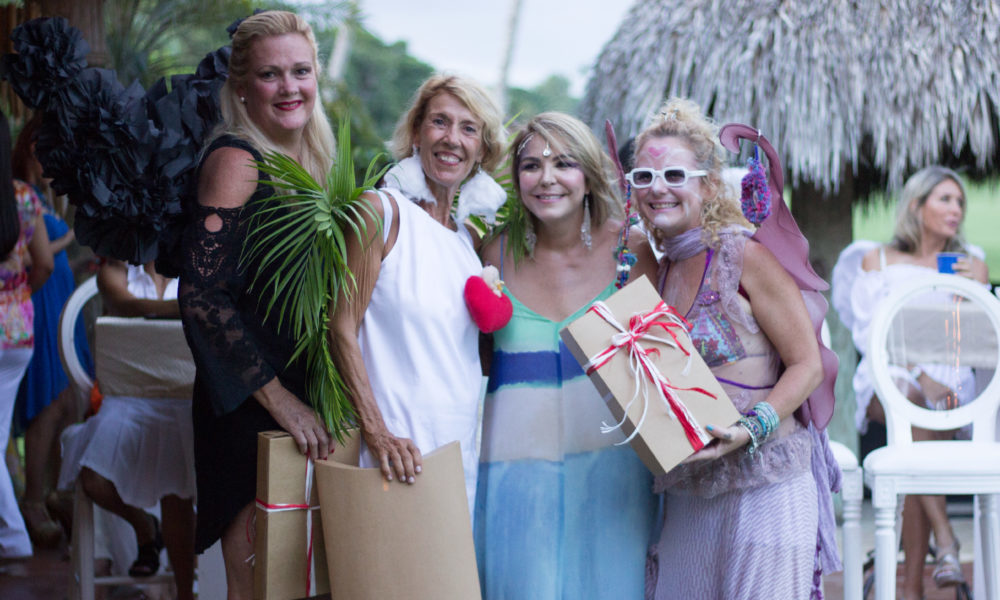 Angel wings of all shapes, sizes and materials strutted down a turf runway on beautiful models closely resembling a Victoria’s Secret Fashion Show – only the VSFS has nothing on all the fun that was had last Friday, August 12th! The latest edition of Café de la Leche, hosted by Malele Strofer at her Ingenio home was one for the books with dozens of women from the Casa de Campo community joining in on the fun!

With just over two weeks notice to put together or shop for wings (many doing so online through TPACK’s quick and easy courier service!), Casa de Campo ladies got creative and came out to support the Hogar del Nino’s Crib Room. When I prepped my cardboard and coffee filter wings 1 hour before the event, I thought I was going to impress…but I was pleased to find out, my little wings were nothing compared to Alessandra Avanzini’s massive coffee filter wings, or Malele Strofer’s shiny and oversized silver wings. WIth so many wings, big and small, it was even a bit complicated getting around without stumbling on other wings or knocking something down. Apologies friends, as I know I totally injured one or two of you getting by!

Every time someone arrived, the angels quickly flocked to receive them in due angel fashion…with compliments, laughter and half-hugs (remember it was hard getting around with wings-hugging was hard!). Soon enough, Amelia Pereyra grabbed the mic and called all angels to line up for the official runway show, where everyone would have a chance to shine in front of the judging panel, headlined by our very own fashion designer, Jenny Polanco. One by one the angels danced, hopped and twirled to the beat of music and were all received with applauses and praises remembering that in this show, all angels were fabulous!

Fatima Renedo won the 3rd place prize and recognition as the most creative use of local materials! With palm branches as wings, cotton cloud earrings and a heart plush toy on her chest symbolizing the angel within, Fatima killed it with her wings!

With a fair share of black angels, Saadia Rivera took home the second prize with fabulous wings made out of black tissue paper! Elegant, classy and sexy!

The first place prize went to none other than birthday girl, Xioma Menéndez herself (HAPPY BIRTHDAY XIOMA!) with a pink bohemian rendition of a fairy angel with knick knacks dangling everywhere. The makeup was on point and her fluttering on the runway really brought the whole costume together.

Casa de Campo Living would also like to grant an honorary 1st place to Malele, as her wings were really beautiful and intricate! We know the humble hostess did not want to be included within the prize giving but we want to honor her regardless 🙂

In addition to the beautiful angels that graced this Café de la Leche, we also enjoyed wonderful cocktails and delicious food! In true Tres Eventos fashion (company co-owned by Malele, Amelia Pereyra and Sarah Troncoso) the decoration was spectacular and angelic to say the least.

This Café de la Leche was one we will all remember and we encourage future Café de la Leche hostesses to keep it as fun and exciting as Malele did. We love getting together on a monthly basis to help the kids of the Hogar del Nino Crib Room, and when we have fun doing so it makes for the gatherings ones we just can’t miss! You set the bar high Malele, thanks for hosting 🙂