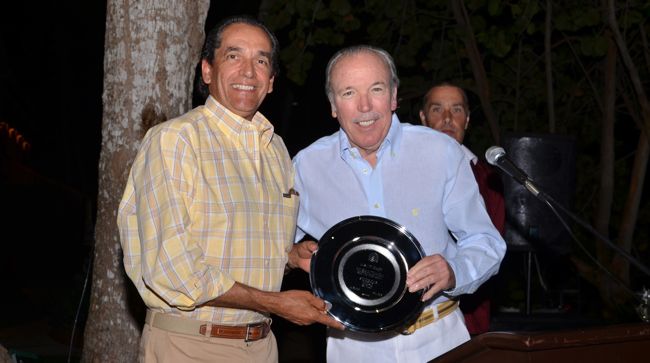 On Saturday evening the 27th of April, J.Pepe Fanjul with his wife Emilia hosted a wonderful dinner and prize-giving celebration at their Casa de Campo estate Casa Grande to mark the end of the 26th annual Sugar Shooting Tournament shot at the Casa de Campo Shooting Center and private wilderness reserve, Rancho Peligro.

With the participation of 37 outstanding shooters, the tournament was “the best” according to host J.Pepe Fanjul, who founded the tournament following the opening of the new Casa de Campo Shooting Center which was previously located near to the Dude Ranch.

“The best. We’ve never had that many great shooters, we normally have a couple of good shooters, but this year it was really difficult to win.”

— J.Pepe Fanjul, founder and host of the Sugar Shooting Tournament

The celebration started with cocktails and picarderas on the terrace overlooking the ocean, before the intimate group moved down to dining area for a delicious buffet lunch which included everyone’s favorite “cochinillo” (roast pig).

As dinner came to an end, J.Pepe along with Casa de Campo’s Director of Shooting took the spot light to reveal the winners of the various tournaments – an exciting moment as unlike with the Sugar Golf Tournament, the shooters had until this point no idea who had won.

As one by one the best shots of the event were awarded their trophies, a few took the opportunity to say a few words, including Mason Berry from Texas, an avid shooter, who during the cocktail hour even told us about his adventures “helicopter boar hunting” and even crocodile wrestling!

“You are a wonderful group of people and we’re happy to call you our friends. I’ve had the privilege of shooting actoss the world and the program they have here is unrivaled anywhere else in world on its diversity and quality.”

The Sugar Shooting Tournament 2013 consisted of numerous different shooting tournaments; Live Pigeon Shoot, the Colombaire and the Sporting Clays, as well as the European Style Driven Bird Shoot. And although the tournament presents prizes to the winners of each category there are also 2 trophies for the overall winners; the High Overall “GUBELMANN CUP” won for the second consecutive year by Andrés Fanjul and the High Overall Cup won Lawrence Berry.

Originally the Sugar Shooting Tournament only awarded trophies to the individual tournament winners, but the Gublemann Cup, donated by Mr. James Gublemann was star-according to Mr Gublemann- “to encourage people to do more than one event”, whilst the High Overall Cup was introduced last year to include the European style Driven Bird Shoot, as well as all the other tournaments.

The following collection of photos were taken on Saturday April 27th at Casa Grande during the closing event for the 26th annual Sugar Shooting Tournament.

The winners of the 26th annual Casa de Campo Sugar Shooting Tournament were as follows: