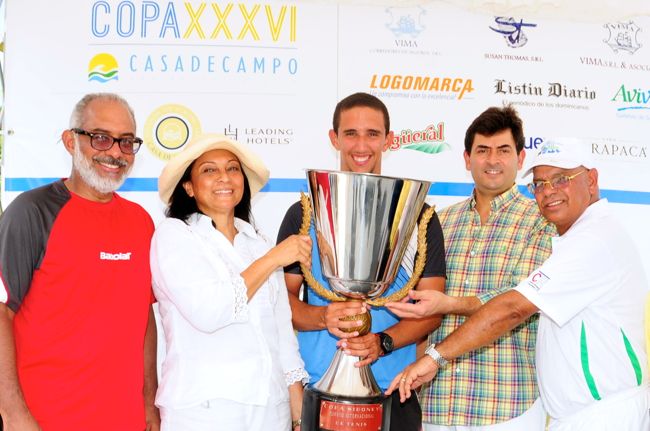 The 36th annual Casa de Campo Tennis Tournament was inaugurated last Thursday the 29th of August with a inaugural swing made by Peter Bonell, Casa de Campo’s Chief Marketing Officer, following which the tournament’s more than 150 competitors battled it out at the La Terraza Tennis Club, with the finals played on Sunday the 1st of September.

Last year won by Spaniard, Alberto Castaño, this year Dominican Andrés Bernal playing in the Open category was crowned the champion of the 36th Casa de Campo Tennis Tournament – the Dominican Republic’s longest running tennis tournament. Competing against Pedro Nolasco, La Terraza’s most formidable tennis player, 3-time winner of the Rick McDaniel Teaching Pro’s Tennis Tournament and the #4 ranked tennis player in the Dominican Republic (2012), Bernal faced fierce competition for the trophy, but in the end soared to victory over Nolasco with a score of 4-6, 6-3 and 10-4.

In addition to the opening ceremony which took place on Thursday evening with the participation of Vincenzo Mastrolilli, the tournament’s founder, a dinner was also celebrated at the La Terraza Tennis Club on the Saturday evening and the prize-giving ceremony on Sunday after the finals.

During the prize-giving ceremony, Daniel Hernandez, manager of the Casa de Campo hotel participated alongside Emilio Vasquez, Casa de Campo director of tennis in giving out the trophies, as well as a special plaque presented to the family of Juan José Álvarez, received by his brother Mario.

The following collection of photos were taken during the dinner and priz-giving ceremony of the 36th annual Casa de Campo Tennis Tournament at the La Terraza Tennis Club in Casa de Campo: