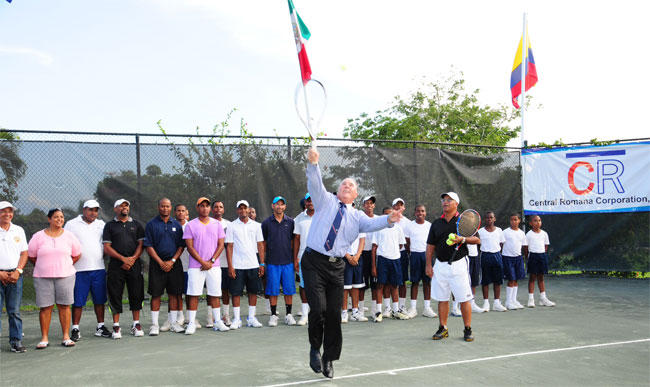 The Dominican Republic’s longest running tournament has taken place at the La Terraza Tennis Club every single year without fail for the last 36 years – and taking part in the gathering to celebrate this incredible achievement was Vincenzo Mastrollili, founder of the tournament, as well as Antonio Esteban, a Casa de Campo villa owner who has played in every single one.

This popular 4 day event is this year dedicated to the memory of Juan José Álvarez, a great Dominican tennis player, who represented Dominican tennis internationally. Like many popular events in Casa de Campo, the International Casa de Campo Tennis Tournament has become increasingly popular with this year more than 150 players taking part from across the Dominican Republic and the world.

The inauguration ceremony opened with a parade of the La Terraza Tennis Club’s ball boys, while the Dominican anthem played as the flags were hoisted over the gathered players, their friends and families, Casa de Campo villa owners and representatives of the Casa de Campo resort.

As is the tradition, the tournament’s enormous trophy was presented to Vincenzo Mastrolli from the hands of Peter Bonell, Casa de Campo’s chief marketing officer, following which he stepped onto central court to perform the inaugural serve, received by Daniel Hernandez, manager of the Casa de Campo hotel.

The tournament itself kicked off earlier in the day, with tournament games being battled out throughout the day.

In the word’s of the tournament’s founder, Vincenzo Mastrolli; “may the best man win”.

Tournament games will continue this week, with the finals played scheduled to take place on Sunday. The full tournament schedule can be seen below.

The following collection of photos were taken during the inauguration ceremony of the 36th annual International Casa de Campo Tennis Tournament at the La Terraza Tennis Club in Casa de Campo:

The schedule for the 36th annual tennis tournament is the following: