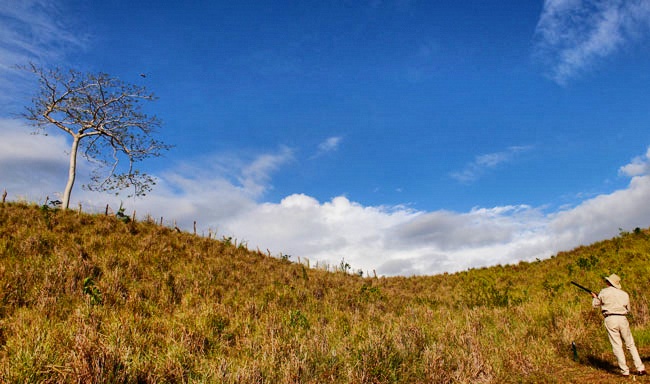 Flying into Rancho Peligro in 2 helicopters, J.Pepe Fanjul was joined by his nephew Andres Fanjul jr., as well as Lawrence and Mason Berry who all won trophies at last year’s tournament. (Click here for photos and the full story.)

After a fine afternoon of shooting, with some very impressive numbers already on the scoreboards, there can be no doubt that the competition is already heating up.

The more than 35 shooters from across the globe, all J.Pepe Fanjul’s personal friends, will be taking part in a series of shooting tournaments all week at the Casa de Campo Shooting Center, as well as at Rancho Peligro, a beautiful wilderness reserve owned by the Central Romana Corporation.

At the end of the event, this Saturday April 26th, the winners of the individual tournaments will be presented with trophies, whilst 2 further awards will be given to the winner of the High Overall “GUBELMANN CUP”, won last year by Andres Fanjul and the High Overall Cup, won last year by Lawrence Berry. Both these winners are taking part again this year, and after getting off to a great start yesterday at Rancho Peligro, it looks like there will be some tough competition to overthrow these reigning champions.

The dinner and prize-giving ceremony will be hosted by J.Pepe Fanjul and his wife Emilia, at their Casa de Campo estate, Casa Grande.