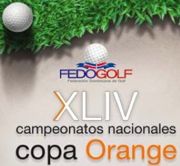 This week from the 23rd to the 26th of June the ‘XLIV Campeonatos Nacionales Copa Orange’ Golf Tournament will be taking place in Casa de Campo in La Romana, the culmination of the FEDOGOLF National Tour of the Dominican Republic for the period 2010-2011.

The XLIV ‘Campeonatos Nacionales’ or the National Championships is a 4 day golf tournament which will be played on Casa de Campo’s Teeth of the Dog and Dye Fore golf courses. At the end of the tournament, the participating golfers will receive their final ranking for the FEDOGOLF National Tour.

During the 4 day golf tournament in Casa de Campo, as well as playing golf, participants will take part in a variety of off-course activities, such as:

A Golf Rules Course
This course will be presented by César Rivera, the coordinator of golf tournaments for the Caribbean Golf Association.
When: Friday 24th of June
Where: Flamboyán Conference Centre at the Casa de Campo hotel

Players Cocktail
An after-game cocktail for all the golfers and special guests
When: Saturday June 25th
Where: The 19th hole of the Dye Fore Golf Course in Casa de Campo, La Romana

Prize-Giving Lunch
When: Sunday 26th June
Where: The Lago Grill near the Teeth of the Dog and the Casa de Campo Hotel

Excellent international golfers as well as golfers from the Dominican Republic will be participating in this very important event.