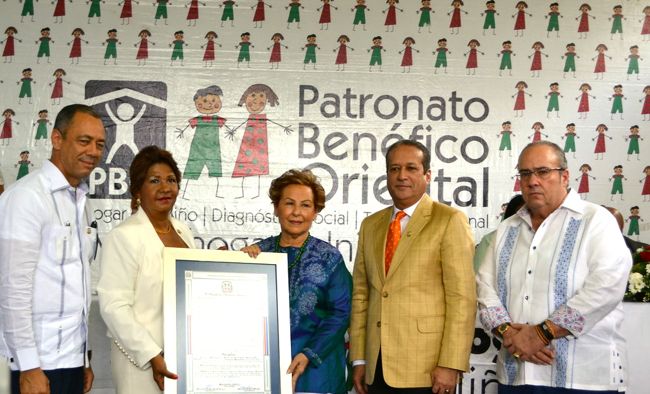 Xiomara Menéndez was yesterday, July 24th 2014, honored by not only the Dominican Senate (Senado de la República Dominicana), but also the Ayuntamiento de La Romana (the local La Romana government) as the “adopted daughter of La Romana” in recognition for 38 years of work with the Hogar del Niño.

The ceremony which took place at the heart of the Hogar del Niño in La Romana was led by Reinaldo Pared Pérez, President of the Dominican Senate. On behalf on the Dominican Senate, Reinaldo Pared Pérez recognized Xiomara’s work with a plaque, while the Major of La Romana, Maritza Suero and Freddy Mejía, the head of the Ayuntamiento de La Roman also presented a plaque, an honor in which they named Xiomara Dajer de Menéndez as the “adopted daughter of La Romana”.

In attendance at the gathering, was Xiomara’s ever-supportive husband Ramon Menéndez, Executive Vice President of Central Romana, who beamed with pride to see Xiomara receive this recognition she so deserves. Also there in support of Xiomara were numerous members of the La Romana and Casa de Campo community, including a number of the founding members of the organisation, as well as of course, Xiomara’s daughter Xiomara Matos or rather Xiomarita, who is the current president of the Hogar del Niño.

In an emotional acceptance speech, Xiomara thanked not only the Dominican Senate and the City Hall, but also everyone who has supported her, “I thank everyone who has worked with me on the Hogar del Niño for the last 40 years,” she said, also giving special thanks to the Central Romana Corporation.

Nearly 4 decades ago, in 1976, Xiomara Menéndez, having recently moved to La Romana, started working with a group of ladies at a small daycare centre ran by a local priest, Padre Abreu. Following the death of Padre Abreu just a few months after they had started, these ladies found themselves embracing the challenge of a lifetime; not only taking on the care of these young children, but also what would soon become their own foundation, a foundation which today is not only the largest daycare and education center in the Dominican Republic, but is also leading the way for other similar institutions.

For example, just 2 months ago, Xiomara Menéndez joined by her daughter Xiomara Matos broke ground on what is being labelled “Hogar del Niño 2”. This Estancia de Infantiles, a project funded by the government’s Social Security program, will be ran by the Hogar del Niño and will care for an addition 1500 children from zero to 5 years old.

But what is it exactly that makes the Hogar del Niño so special? Let’s take a look at the facts and figures:

And all that was born from the dream, passion and dedication of Xiomara Menéndez, who over the last 4 decades has literally dedicated her life to the Hogar del Niño. And while Xiomara was humble in her recognition, saying “this recognition is not for me, it’s for all those who have made this marvellous dream a reality,” there can be no doubt that this remarkable lady truly deserves this honor.