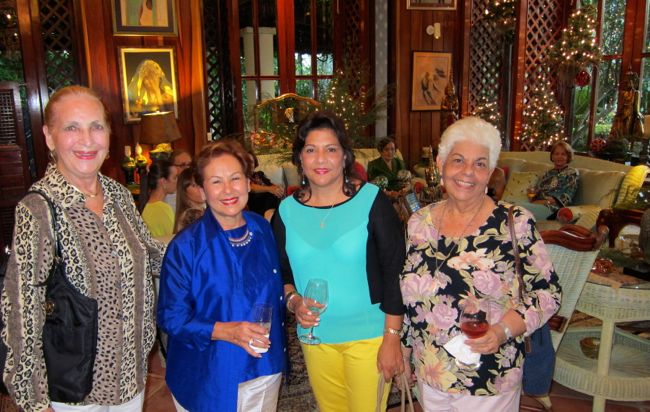 Especially excited about this Christmas themed edition of the Café de la Leche, I was one of the first to arrive – and was greeted at the door by the most adorable replica of a miniature TV set – with a Christmas scene playing holiday music on a loop, which Xiomara later told me was a gift from her daughter, Xiomarita, President of the organization.

Accompanying the TV set was an impressive collection of turtles in all shapes, sizes and colors – something which sparked a conversation between Xiomara and myself about these beautiful creatures – she tells me she often spots large Green turtles swimming in front of her home and whilst they do not lay eggs on her property she does know that they nest every year in a neighbouring villa – just like the Hawksbill Turtle we spotted nesting on Minitas Beach earlier this year.

From there my eyes wander to Xiomara’s “Christmas Village” – a product of more than 2 weeks work. Lovingly created with cotton wool for the snow and miniature pine trees to create a wintery look, the village is filled with miniatures collected on her travels around the world – and it is a sight to behold – as is the rest of her home, a wintery wonderland filled with Christmas trees, decorations and on this occasion a buffet of Christmas treats!

With many more than 100 ladies in attendance there can be no doubt that this Café de la Leche is one of the most popular of the year – with everyone mingling and enjoying the magical spirit of Christmas over a glass of traditional Dominican “Ponche” (eggnog), red or white Sangria and a delicious buffet of sweet and savoury treats – including caramel covered profiteroles!

It certainly goes without saying that the event was a great success – with sack fulls of candies and other treats collected for the Hogar del Niños annual Christmas Party – being held today (Tuesday December 18th) – a celebration in which each child receives a gift they have actually asked for, as well as a generous bag of candies – courtesy of the ladies of the Café de la Leche!

Merry Christmas and thank you to all who attended this Café de la Leche and helped spread the joy and Christmas cheer to the Hogar del Niño’s little ones!

The following collection of photos were taken on Wednesday December 12th at the Casa de Campo villa of Xiomara Menéndez: